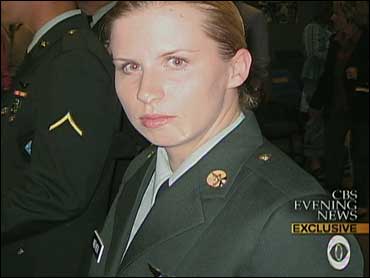 Jessica was one of those women. Born into a military family, at 24 she enlisted in the Army.

Following basic training she was posted half a world away at Camp Humphreys in South Korea. She was assigned to an Apache helicopter maintenance crew, one of three women in a unit of 60 men. Jessica worked hard to blend into a very macho world, CBS News anchor Katie Couric reports.

"You figure out how to turn the guy off, and become one of the guys," she said. "That's your safety mechanism."

But that safety mechanism failed. Just weeks into her new assignment, her squad leader began making unwanted sexual comments. Then it turned physical when he tried to force himself on her. She was afraid to report it, tried to forget it, but the assault haunted her. In a completely unrelated incident when she was out one night, someone she knew from another base raped her.

"The betrayal issues to this day are still pretty deep," she said. "You know, I was like, 'I'm willing to give my life for this guy next to me but how do I know that he's not going to hurt me?'"

Jessica's story is not unique. One in three female soldiers will experience sexual assault while serving in the military, compared to one in six women in the civilian world. The Pentagon released a disturbing report Tuesday on sexual abuse in the military, saying that more than 2,900 sexual assaults were reported last year, up nearly 9 percent from the year before. Nearly two-thirds of the cases involved rape or aggravated assault.

Couric asked Michael Dominguez, principal under secretary of defense for personnel and readiness, how big a problem sexual assault is in the military.

"Sexual assault injures troops," he said. "Injures readiness. So regardless of the numbers we have, it is by definition too much.

But how often does it happen?

The Pentagon only started a comprehensive program to track incidents in 2006, and only after Congress mandated it do so.

That year there were 2,974 cases of rape and sexual assault across the services. And of those, only 292 cases resulted in a military trial.

And in 2007 there were even fewer prosecutions.

"Of more than 2,200 servicemen investigated for sexual assault, only 181 were prosecuted?" Couric asked Dominguez.

"Yes, we absolutely have to get better," he said. "[Defense] Secretary [Robert] Gates himself is driving this initiative this year to improve our ability to investigate, to prosecute and convict. This is not where we want to be."

And in a majority of cases, the punishment doesn't seem to match the crime. Often most offenders only get a reduction in rank or reduced pay.

"These are major crimes, not misdemeanors," said Vivian Gembara, a retired member of the Army's Judge Advocate General's Corps. "A lot of times what we see in the JAG court is very inexperienced, brand spanking new lawyers being given rape cases, murder cases."

This month, Defense Secretary Robert Gates called for a military-wide "review of the training and experience' of investigators and prosecutors for sexual assault cases.

For many victims their assault remains a shameful secret. The Pentagon acknowledges that some 80 percent of rapes are never reported - making it the most under-documented crime in the military.

Callie Wight, a counselor for the Veterans Administration said victims haven't come forward for a number of reasons.

The military is trying to reduce the stigma through increased awareness, education and guaranteeing confidentiality to victims reporting such crimes. The army has launched a national program called "I Am Strong." Installations like Fort Irwin in California credit the campaign with driving assault numbers down.

But for soldiers like Jessica any changes came too late.

"I think the worst letdown is people who didn't believe in me to help get through this and keep me in the army," she said. "I really wanted to be a good soldier."

Traumatized by assault and re-traumatized by inaction, she has left the military and is now trying to help other victims.

CBS Evening News, May 27, 2022
Thanks for reading CBS NEWS.
Create your free account or log in
for more features.
View CBS News In
CBS News App Open
Chrome Safari Continue
Be the first to know
Get browser notifications for breaking news, live events, and exclusive reporting.