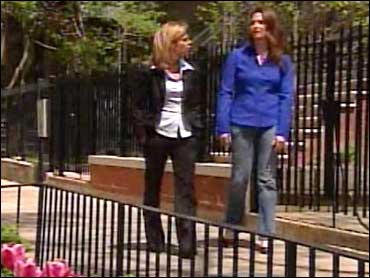 No matter how prestigious the school or how talented the sports team, many colleges in the United States share a dark secret: the prevalence of sexual assault.

Annie Hylton had been at the University of Virginia for only five months before she says her world turned upside down.

"I went to the party and we were basically on a date and then it was one of those next things I knew woke up to being raped," she told The Early Show correspondent Tracy Smith.

Hylton did all the right things: She went to the hospital and university authorities. She pressed to have her case heard by the school judiciary board in this small conference room where she sat just feet from the man she says raped her.

"Even thinking about it now makes my chest get tight," she said. "Like, it's a horrible feeling."

That student still maintains the sex was consensual, but the panel ruled in Hylton's favor, saying the man violated the school's code of conduct that prohibits sexual assault. Despite their ruling, they didn't expel or even suspend him. Instead they continued to allow him to live in the same frat house where Hylton says he assaulted her.

"Why did I go through it?" she said. "Here a university board found a student responsible for violating one of their codes — a serious code — you know, violation of another person, and he wasn't kicked out! He was allowed to go to school at the university."

"I was very frustrated, I've been frustrated more than once," Claire Kaplan, the school's sexual assault counselor, who sat with Hylton during the hearing, said. "Even when a person's found not guilty, when I think the person was guilty, then you see them walking around and now they're walking around with a smirk on their face because they got away with it. It's so, so hard."

Hylton took her case public and the university responded by toughening its sexual assault policies. Still, they stand by the decision they made in Hylton's case.

"He did have a full sanction," former associate dean of students Shamim Sisson said. "And while I'm not at liberty to discuss that case with you, if you asked him if nothing happened to him he would not report it in that way. I'm sorry, and I know that that is the outcome sometimes, and it's one of the many really difficult parts of this process."

Kaplan said the university could have take steps to help sexual assault victims.

Virginia is hardly the only university struggling with how to handle accusations of rape. According to a government study, less than 5 percent of attempted and completed rapes on campus actually are reported, and some students say it's the schools themselves that make it difficult to come forward.

"I was the victim of a crime. I was raped," former Notre Dame student Lindsay Charles said. "I didn't do anything wrong. and for them to say don't go to the police and report this crime I think is a travesty."

When Charles told staff at Notre Dame that she wanted to press charges against four football players, she says the university tried to talk her out of it. Even still, she went to the police.

"Because I went forward, because I did press charges, they couldn't sweep this one under the rug. They had to do the right thing," she said.

Notre Dame expelled all four students, who still claim they're innocent. The university wouldn't grant an interview and wouldn't comment on this case for privacy reasons, but responded with a statement:

"Our policies and procedures call for informing victims of all their options, including going to the police to file a complaint, so that they can decide how to proceed."

When Charles' case went to criminal court, only one of the young men was convicted on a lesser charge. She says no matter the outcome, just getting her case heard was far too tough on her.

The best chance an assault victim has for justice is coming forward, Carter said. Hylton hopes her actions will give future victims a better chance.

"It was just one of these things," she said, "I have to do something because other women can't go through it the way I went through it."

For more on campus security, visit the Web site of the non-profit group Security on Campus, by clicking here. For help in picking a college based on its level of security, click here.