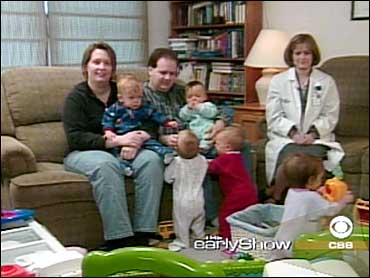 They were born three months too soon and none weighed even 3 pounds, but on their first birthday, Ohio's first sextuplets are doing fine.

The same can be said of their parents, thanks to a volunteer brigade of bottle-holders, laundry-washers and story-readers.

The babies — Alex, Kyle, Isabella, Logan, Sophia and Lucy — spent several weeks in neonatal intensive care at Akron Children's Hospital after being born Feb. 26, 2004. Since they have come home, though, they've enjoyed good health (a few sniffles and earaches notwithstanding).

The sextuplets have no shortage of fans who make regular visits to the suburban Cuyahoga Falls house that also is home to parents Keith and Jennifer Hanselman and big brother, Connor, 3.

On Wednesday, The Early Show's cameras

looked in on the entire family
in the Hanselmans' home.

Jennifer told co-anchor Hannah Storm the volunteers have been indispensable: "We have almost 70…and we definitely would have not made it through this year without all of our volunteers.

Who's been stepping up?

A group of residents at a local assisted-living facility does the babies' laundry twice weekly.

The babies gradually are developing their own personalities: Lucy, the bossy one; Isabella, the diva, who was first to cut teeth; mild-mannered Sophia; easygoing Kyle and Alex; and Logan, who's "a little touchy," his mom said.

And they're coming into their own in other ways, Jennifer reports: "The girls all walk along the furniture. They stand up and scoot along and a few of them stand with their hands up occasionally, so I know we're just a couple of weeks away from real walking -- and that's kind of terrifying.

"We have gates everywhere. It's a constant struggle to keep them out of stuff, especially in a house this small."

Jennifer conceived the children after fertility treatments. When doctors suggested they consider aborting some of the fetuses, a procedure known as selective reduction, the couple opted against it for religious reasons.

He adds that getting ready to leave the house with everyone is a true challenge. "It's like packing for a small army," Keith told Storm.

Keith, a 31-year-old chemist, brings Connor home from preschool. Jennifer, 30, tends to the inevitable squabbles and bumps from sibling battles, subduing the clamor with Cheerios and Baby Einstein videos.

Dr. Jennifer Grow, who helped deliver the sextuplets, recalled the scene a year ago. "That day was absolutely fabulous," she told Storm.
"It was a delight to everybody who was partaking in this endeavor, and we surprised ourselves, because it was smooth sailing the whole way. There was not one glitch from the time of delivery to the time they went home."

The hospital was planning a birthday party for the sextuplets Tuesday.