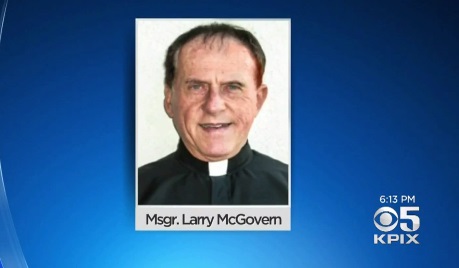 STOCKTON, Calif. -- A Northern California Catholic church is embroiled in a sexting scandal.

A Stockton parishioner claims he was fired from his job after his priest sent him an explicit text message, CBS San Francisco reported.

Now the parishioner has filed a lawsuit.

The incident allegedly happened at the Presentation Church and School. The man bringing the lawsuit has maintained the fountains and pool there for the past seven years.

His attorney, Irvine-based John Manly, said while the married man in his 40s cleaned the pool, Pastor Lawrence McGovern would often sunbathe and make flirtatious comments, "Laying around in a speedo, making our client very uncomfortable."

"Our client's a married man," said Manly. "This is his pastor."

The suit claims in late July, McGovern texted the man a picture of his genitals.

Then he allegedly wrote, "Oops, sorry about that. The curse of the Internet. Shame on me. What is my penance?"

The employee wrote back, "I thought you were celibate, Monsignor."

McGovern's alleged response? "But it is not me -- celibate means not married -- sometimes I get the wrong images."

The suit claims the pool man then reported the behavior to police and days later, he was fired.

The Stockton Diocese issued a statement regarding the allegations: "In accordance with the canon law of the church, Bishop Stephen Blaire has placed Monsignor McGovern on administrative leave pending a full and complete investigation."

Stockton police did investigate and referred the case to the San Joaquin District Attorney's office. The district attorney is now deciding whether charges should be filed.

Meanwhile, the pool man's child is scheduled to start at the school where McGovern is the pastor, so Manly said he wants McGovern gone.

"If any principal or any school administrator sent a picture of their penis to a parent, they should be fired, not the other way around," he said.

As Stockton's Vicar General, McGovern is second-in-command of the diocese.

In that position, Manly said the Monsignor was in charge of at least two priests who were found to have molested children.