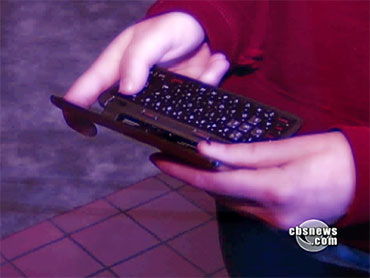 At Susquenita High School, 15 miles outside of Harrisburg, Pa., eight students, ranging in age from 13 to 17, have learned a tough lesson about "sexting."

"Take a photograph of yourself or somebody else nude and send it to somebody else, you've committed the crime," said Perry County District Attorney Charles Chenot, who has prosecuted two sexting cases involving a total of 10 minors in the past year.

Chenot said he considers sexting a form of child pornography and wants kids to understand once those images are in someone else's hands they could wind up anywhere, even the Internet, possibly forever.

The teens at Susquenita High, who all knew each other, were accused last fall of using their cell phones to take, send, or receive nude photos of each other and in one case a short video of a oral sex. That resulted in a felony pornography charge for each minor.

"That was the only charge that really fits what they were doing," said Chenot. "What would have been the best thing to charge would be something that would have been a little less severe but would still draw these teenagers' attention to the wrongness of their acts."

"Should they be crimes at all?" Bailey asked. "This is an over-zealous and inappropriate application of the criminal law."

Bailey represents the lone student from Susquenita who has not pleaded guilty to lesser charges, which would require him to take a class on victimization and perform community service. After successfully completing the so-called "diversionary program" and a period of probation, those juvenile conviction records would be expunged, according to Chenot.

"Are you going to stop kids from sexting that way?" Bailey asked. "Maybe you should try talking to mom and dad."

"My view is kids should not be held under the same laws as child predators," Grove said.

His bill, which would limit the punishment for sexting, has passed the state House Judiciary Committee and is due for a full floor vote this month.

"What we're trying to do is say: 'Let's not charge a felony, let's get a common sense law together that charges a misdemeanor,'" Grove said.

Pennsylvania's proposed reform is typical of the 20 states, according to the National Conference of State Legislatures, that have considered new sexting laws for minors during the past two years. Five states -- Arizona, Nebraska, North Dakota, Utah and Vermont -- have already adopted changes.

"We need the appropriate punishment for the crime," Grove said.

But some advocates object that sexting, especially between teens who consent to exchange the images, is considered a crime in the first place.

"Why should we criminalize a kid for taking and possessing a photo of herself," said Marsha Levick, legal director of the non-profit Juvenile Law Center. "There is no problem that needs to be solved."

How schools find out about the nude photos has also provoked a debate with some child advocates complaining that schools are on shaky legal footing when it comes to searching students' cell phones.

A case in point pits a 19-year-old woman known as "NN" against Tunkhannock High School, her former school, near Scranton, Pa. She graduated last year.

"I took semi-nude pictures of myself and saved them into my phone," NN told CBS News in an exclusive interview.

When NN was still 17, a teacher confiscated her phone one morning because NN was talking on it before class. The school bans student cell phone usage on school grounds. Her principal, Gregory Ellsworth, then scrolled through the phone's digital photo album.

"He told me that he found explicit photos on my phone and that he sent it away to a crime lab," NN said. "I was really embarrassed, humiliated, because it was personal."

With the help of the American Civil Liberties Union, NN sued the school last month seeking damages for invasion of privacy, accusing the school of violating her First Amendment right to free speech and her Fourth Amendment protection from illegal searches and seizure.

"A search of the device is akin to browsing through someone's address and appointment book, opening and reading letters sent by U.S. mail, and rummaging through a family photo album or viewing home videos," the lawsuit says.

Ellsworth had no comment. Michael Levin, an attorney for the school district, said, "I don't think any school district should tolerate kids bringing nude photos to school whether they be in electronic or paper format." Levin said Supreme Court rulings supported the school's actions.

Besides being suspended from school for three days, NN also faced child pornography charges from the Wyoming County District Attorney. To avoid them, she agreed to a deal, like seven of the Susquenita defendants, submitting to a five-week course on violence and victimization, meeting twice a week.

"If I was victimized, it was just like by my school," NN said. "I don't think by prosecuting them it's helping them at all."

But Chenot, the Perry County district attorney, said he is just trying to protect kids.

"Probably it's harmless when they take the pictures of each other and just share them between them, but the potential is there for there to be widespread distribution," said Chenot. "What we have here is a case where technology has gotten ahead of the laws."