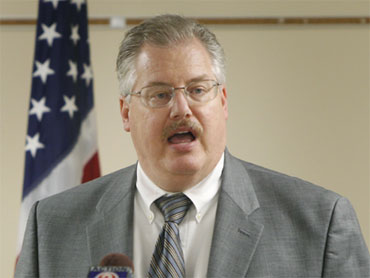 A prosecutor caught sending racy text messages to a domestic abuse victim went on medical leave Monday and hired an attorney to help him keep his job.

Calumet County District Attorney Ken Kratz, 50, acknowledged last week he sent 30 text messages in three days trying to start an affair with a 26-year-old woman while he was prosecuting her ex-boyfriend in an abuse case. In the texts, he asked whether she was "the kind of girl that likes secret contact with an older married elected DA," called her a "tall, young, hot nymph," and questioned whether her low self-esteem was to blame for her lack of interest.

According to records obtained Monday by The Associated Press, Kratz started sending the texts minutes after he told the woman, Stephanie Van Groll, he was considering reducing the charge against ex-boyfriend — a move she did not support.

Gov. Jim Doyle planned to meet with Attorney General J.B. Van Hollen on Monday afternoon to discuss Kratz and then hold a news conference on the topic. Doyle said last week he was considering all options against Kratz, including removing him from office for cause.

If Doyle takes that step, Attorney Robert J. Craanen, who told The Associated Press he was hired to defend Kratz from attempts to remove him from office, said Kratz would have the option of contesting the decision in a hearing. Craanen said he would argue that other district attorneys have committed more serious misconduct related to withholding evidence and kept their jobs.

"This is just a really inappropriately bad mistake by this DA after many years of commitment to the community," Craanen said.

At the time of the texts, Kratz was prosecuting Van Groll's ex-boyfriend Shannon Konitzer for felony strangulation and misdemeanor disorderly conduct. Authorities say Konitzer grabbed her by the neck and threw her to the ground in a jealous rage, got on top of her and choked her with both hands. She eventually got away and called police.

Van Groll told state investigators the text messages started coming after she met with Kratz to be interviewed about the case. She said she thought it was odd he asked at the end of the conversation whether she would mind if he reduced the charge from a felony to a misdemeanor, according to the Division of Criminal Investigation records made public Monday. She responded that strangulation is a felony.

Minutes after she left his office, Kratz started sending the series of messages.

Kratz and his attorney did not return messages seeking comment about the DCI records, which were released to the AP under the public records law.

After Van Groll complained to police about the harassment, the state Department of Justice acted as special prosecutor against Konitzer. He was convicted of felony strangulation and sentenced to jail time and probation. The disorderly conduct charge was dropped as part of a plea deal.

Monday's news that Kratz is on indefinite medical leave comes after he announced Friday he would get therapy but take time off only as the court calendar would allow.

Kratz, who has been in his position since 1992, has rejected calls from state lawmakers, a coalition of advocates for crime victims, his peers and state newspapers to resign from his $105,000 per-year job. He is not up for re-election until November 2012.

Appearing on "The Early Show on Saturday Morning," attorney Michael Fox (who is representing Stephanie Van Groll) said Kratz' comments are "typical of every politician and entertainer who gets into trouble - these are the things they say after they're caught."

Fox said, "It doesn't take much to text 'I'm sorry' after you text the 30 messages that, in essence, threaten somebody in a very vulnerable position. So, if it takes him a year to do that and he does that only after [being] asked to step down, only after he had retained private counsel and only after he, as I understand, received a call from the governor, it doesn't carry much meaning."

When asked by anchor Chris Wragge if he thought Kratz should be disbarred, Fox said, "Disbarment is an entirely different issue. The issue right here is what a public official's obligation is and whether he's compromised his own mission?

When asked if the victim accepts Kratz's apology, Fox said, "My client didn't pay much attention to his apology, since it came about a year after it probably should properly have been given."