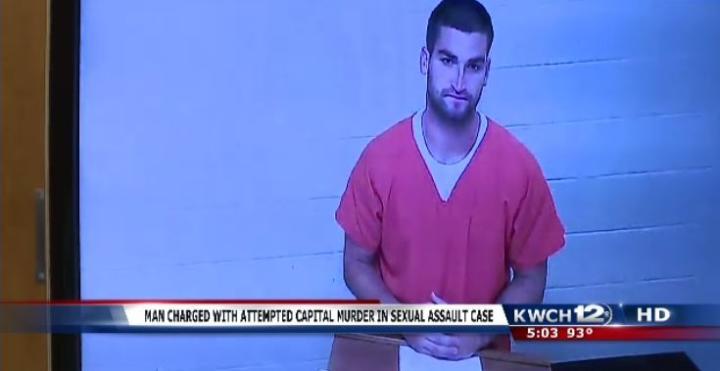 WICHITA, Kan. -- A registered sex offender has been charged with raping a 7-year-old girl in a stranger's Wichita apartment six weeks after he was freed from prison for another rape.

Corbin Breitenbach, 23, was charged Tuesday with attempted capital murder, aggravated criminal sodomy and aggravated burglary. Breitenbach said little during his first appearance other than to ask his bond amount. When he was told it was $1 million, he shook his head.

The Wichita Eagle reports the registered sex offender was sentenced to five years and eight months in prison for choking and raping a 22-year-old woman in 2012. He was released April 28 on the condition that he report to a parole officer after receiving credit for participating in a rehabilitation or treatment program. He could have been released as early as December but wasn't because of 32 prison disciplinary reports, according to the Kansas Department of Corrections.

The latest attack happened in the early morning hours of June 11. Police said the suspect entered the apartment where the girl was staying for the night without forcing entry and without permission. He did not know the girl, reports the Wichita Eagle.

Charging documents said Breitenbach removed the girl from a bedroom, choked her until she was unconscious, raped her on an outdoor balcony and left.

Sedgwick County District Attorney Marc Bennett said he saw the girl on Tuesday and that she is doing "better" and has been out of the hospital for days. The condo where she was attacked is directly across a small courtyard from where Breitenbach's girlfriend lives. Police arrested Breitenbach on Thursday after an intensive investigation.

A statement left on the voicemail recording of an Eagle reporter from Beitenbach's family said the family "is in utter shock and disbelief."

"It is impossible to communicate the depth of our sorrow and the grief we feel for the victim and her family," the statement said.

He is due back in court July 5.