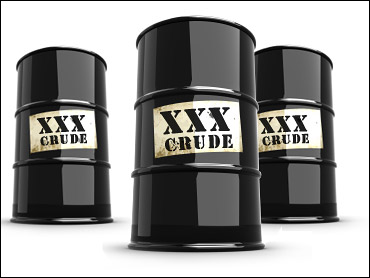 Government officials handling billions of dollars in oil royalties engaged in illicit sex with employees of energy companies they were dealing with and received numerous gifts from them, federal investigators said Wednesday.

The allegations of bad behavior involve 13 government employees in Denver and Washington, reports CBS News investigative correspondent Sharyl Attkisson. Those accused are workers who sell U.S. mineral rights to oil companies. Such sales are one of the government's biggest sources of revenue besides taxes.

But the Inspector General for the Interior Department says they rigged contracts, and engaged in illegal moonlighting, drugs, sex and gift-taking from oil company representatives, according to three reports released Wednesday.

The reports revealed startling allegations including that an employee attended a so-called "treasure hunt" in the desert with all expenses paid by an oil producer, and that a former supervisor - who bought cocaine from a colleague then boosted her performance award - had sex with subordinates, and steered government contracts to an outside business where he also worked, Attkisson reports.

The investigations reveal a "culture of substance abuse and promiscuity" by a small group of individuals "wholly lacking in acceptance of or adherence to government ethical standards," wrote Inspector General Earl E. Devaney.

The reports describe a fraternity house atmosphere inside the Denver Minerals Management Service office responsible for marketing the oil and gas that energy companies barter to the government instead of making cash royalty payments for drilling on federal lands. The government received $4.3 billion in such Royalty-in-Kind payments last year. The oil is then resold to energy companies or put in the nation's emergency stockpile.

Between 2002 and 2006, nearly a third of the 55-person staff in the Denver office received gifts and gratuities from oil and gas companies, the investigators found.

Devaney said the former head of the Denver Royalty-in-Kind office, Gregory W. Smith, used illegal drugs and had sex with subordinates. The report said Smith also steered government contracts to a consulting business that was employing him part-time.

Smith, contacted by e-mail by The Associated Press, said he had not seen the report and could not respond. He and nine other employees in the Denver office are mentioned in the reports.

The findings are the latest sign of trouble at the Minerals Management Service, which has already been accused of mismanaging the collection of fees from oil companies and writing faulty contracts for drilling on government land and offshore. The charges also come as lawmakers and both presidential candidates weigh giving oil companies more access to federal lands, which would bring in more money to the federal government.

"This all shows the oil industry holds shocking sway over the administration and even key federal employees," Nelson added. "This is why we must not allow big oil's agenda to be jammed through Congress."

While most government royalties for drilling on federal lands are paid in cash, the government in recent years has been receiving a greater share of its oil and gas royalties in actual product. More of that oil is also being sold on the open market, versus being deposited in the Strategic Petroleum Reserve, the nation's emergency oil stockpile. Congress earlier this year passed a law halting deposits of oil to the reserve to alleviate high gasoline prices.

Interior Secretary Dirk Kempthorne, who was asked about the reports earlier in the day before they were given to him and congressional offices, said the investigation was prompted by a 2006 phone call from employee who said there were ethical lapses in the Denver office.

"I look forward to having the opportunity to review the inspector general's findings so we can take the appropriate actions," Kempthorne said.