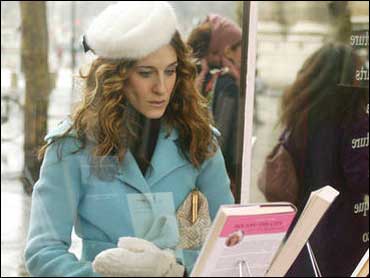 A consumer alert for the millions who have seen the "Sex and the City" movie: There is no such book as "Love Letters of Great Men," which Carrie Bradshaw reads while in bed with Mr. Big.

The closest text in the real world apparently is "Love Letters of Great Men and Women: From the Eighteenth Century to the Present Day," first released in the 1920s and reissued last year by Kessinger Publishing, which specializes in bringing back old works.

Richard Davies, press manager for AbeBooks.com, an online seller that features used titles, told The Associated Press on Tuesday that he has received hundreds of queries about the book's existence.

Photos: "Sex" IN The City

Enough readers have been directed to the Kessinger anthology, on AbeBooks and elsewhere on the Internet, that it ranked No. 134 on Amazon.com on Tuesday afternoon.

In "Sex and the City," an early scene shows Carrie (Sarah Jessica Parker) poring over the imaginary collection, although citing real letters by Beethoven and Napoleon among others. Big (Chris Noth) later takes passages from the book as he expresses his love, by e-mail, to Carrie.