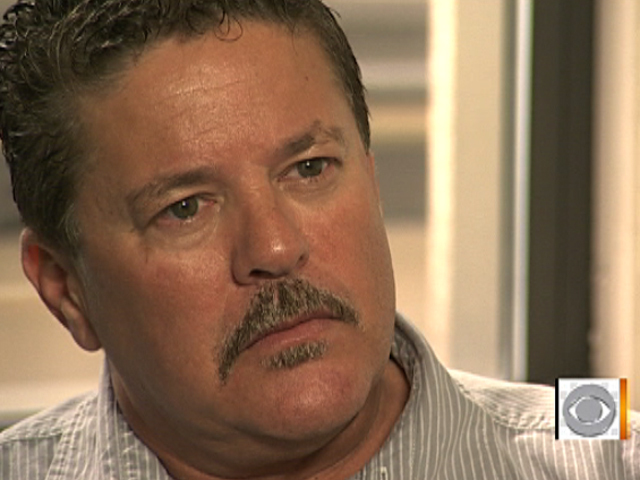 Recent reports on the Penn State and Syracuse sex abuse scandals have given a number of alleged victims of child molestation the courage to step forward and share similar stories.

It's estimated that one in four girls and one out of six boys will be sexually molested by the time they are 18, CBS News correspondent Michelle Miller reports. But those numbers are based on reported cases, and because most of these assaults go unreported, some fear those numbers are much higher.

John Sweeney says he's among those who didn't report his molestation, until now. Sweeney recently sat down with Miller to speak out -- for the first time -- about the horrors of his childhood.

"I lived it, I saw it. From the showers to the dormitory room," Sweeney told Miller.

Sweeney says he kept his secret for 43 years. But the day after former Penn State coach Jerry Sandusky was arrested for allegedly molesting children, he broke his silence.

"When I saw the Penn State mess with the showers, it just brought it all home, so many bad feelings, so that is what prompted me to come forward," he told Miller. "It's just a horrible thing to go through."

Sweeney claims an assistant headmaster at his private boarding school in Newton, Mass., sexually molested him while he slept in his dorm room. He was 11 years old.

"When I woke up and I screamed, 'What the 'F' are you doing?" Sweeney said. "And he fell off the bed pulling his pants up and screaming at me, 'It's lights out, it's lights out.'"

Sweeney says the man made a number of other advances, but when he told his parents, they didn't believe him. A year later, Sweeney left the Fessenden School. The assistant headmaster was never charged. But school officials confirm he resigned in 1977 after being arrested in connection to a child prostitution operation.

When asked why he held it in for so long, Sweeney said, "I was so ashamed, I felt that people would look at me different."

That shame is shared by thousands of victims. But investigations of child molestation at Penn State, and now most recently at Syracuse University, has had an impact on abuse crisis centers nationwide.

Two of the nation's largest abuse hotlines, The National Child Abuse Hotline and the Rape, Abuse and Incest National Network, saw a spike of 1,500 more calls for help in the two weeks after the scandal broke.

"These kinds of high-profile cases what we have seen is that they do open the floodgates," Liz Roberts, chief program officer of Safe Horizon, a New York organization that assists victims of child abuse, said.

"What survivors see in this story is that there were child victims who came forward and that they've been believed, that law enforcement is taking action to hold the perpetrator accountable," she added.

Attorney Mitch Garabedian has represented thousands of victims of alleged child abuse, including cases against the Archdiocese of Boston. He is representing John Sweeney and five other alleged victims at Fessenden School.

"Pedophiles don't get stopped until they are caught or they die," Garabedian said. "Each and every victim has his or her own coping mechanisms. When they can come forward, they'll begin to heal. Many victims, most victims, don't heal completely, but they'll at least get some closure in their lives."

"I just want people to be able to see me and say, 'You know what, this happened, they can't hold this in for 43 years, they just can't,'" Sweeney said.

One thing advocates say would help uncover these cases sooner are stronger reporting laws, Miller added on "The Early Show." Only 18 states require anyone who suspects abuse to notify authorities.