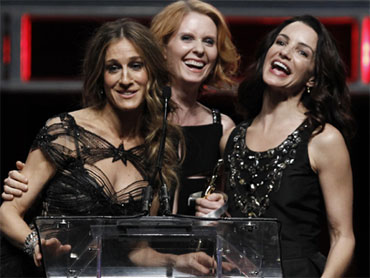 "Sex and the City 2," the sequel to the enormously successful "Sex and the City" movie based on characters from an HBO TV hit of the same name, is taking the women to Abu Dhabi this summer.

Fashionistas in the desert? That appears to be big news about the closely guarded plot, details of which were revealed by the director and cast during promotional interviews at ShoWest in Las Vegas last week.

"This is probably the most time the characters have ever spent together," Parker said in an interview at the convention for theater owners, where distributor Warner Bros. premiered a new "Sex and the City 2" trailer.

"Simultaneously, it was the first time that the four actors left the country, lived together, worked together for almost eight weeks solid and when I say lived together, I mean breakfast, lunch and dinner together every single night," Parker continued. "We were removed from family and friends, and we've never had that kind of time together, because we always went home to friends and family and children and husbands and wives. It is the most fun and the hardest we've ever worked together."

The sequel which opens in theaters May 27, has Kim Cattrall's public relations exec Samantha Jones taking her three friends along to Abu Dhabi, where her movie star ex is shooting an action film. But the actual filming of those scenes was done in Morocco, rather than the capital city of the United Arab Emirates.

Nevertheless, the Middle East action presents a culture clash as the four very independent and very sexy fashionistas maneuver through a land steeped in tradition regarding the behavior and appearance of women.

"How do you sort of live up to the idea of fashion being a component of this particular franchise and be in a culture that requires you to be covered, and how to be sexy or lack a sort of chaste quality?"
Parker said.

And don't forget the camels. The four stars have gone on record about their camel rides, two of them on an ornery, spitting animal, and two others on a sweet-tempered camel that would suddenly sit and could not be coaxed up.

"I never in a million years thought we would be in the dunes of the Sahara desert, shooting a movie, on camels, dressed in the most inappropriate clothes. In heels," Parker has been quoted as saying.

The foursome needed to work hard, in the Middle East and in scenes shot back in New York, to top the first big-screen spinoff of the TV series, which far exceeded industry expectations two years ago with a $56.8 million opening weekend. The movie went on to top $150 million at the box office.

"Sex and the City 2" reunites Carrie and friends with the key men in their lives, including Big (Chris Noth), whom Carrie married in the first movie.

But the trailer reveals that Carrie finds temptation in the desert when she runs into her own ex from the TV show, Aidan (John Corbett).

"We bump into each other halfway around the world?" Carrie muses. "That means something."

The trailer also sets up crises for Carrie's friends, Samantha struggling to stay youthful, Davis' Charlotte York feeling overwhelmed by her children, Nixon's Miranda Hobbes wishing for time away from work to be a stay-at-home mom.

Michael Patrick King, who wrote and directed both movies and was executive producer on the TV show, said the big question people asked before the first movie came out was whether or not Carrie and Big got married.

"So we move from marriage to the next logical place in people's minds, is she having a baby?" said King, who acknowledges that "it's one of the thoughts of the movie" but will not answer for sure.

And will there be a "Sex and the City 3?" No one has said for sure but Parker isn' closing the door on it. She says it depends on the reception the sequel gets at the box office and the ideas King comes up with for new plotlines.

"For me, I always like to do something that's individualistic and unique for Carrie Bradshaw," King said, "since she is one of a kind."