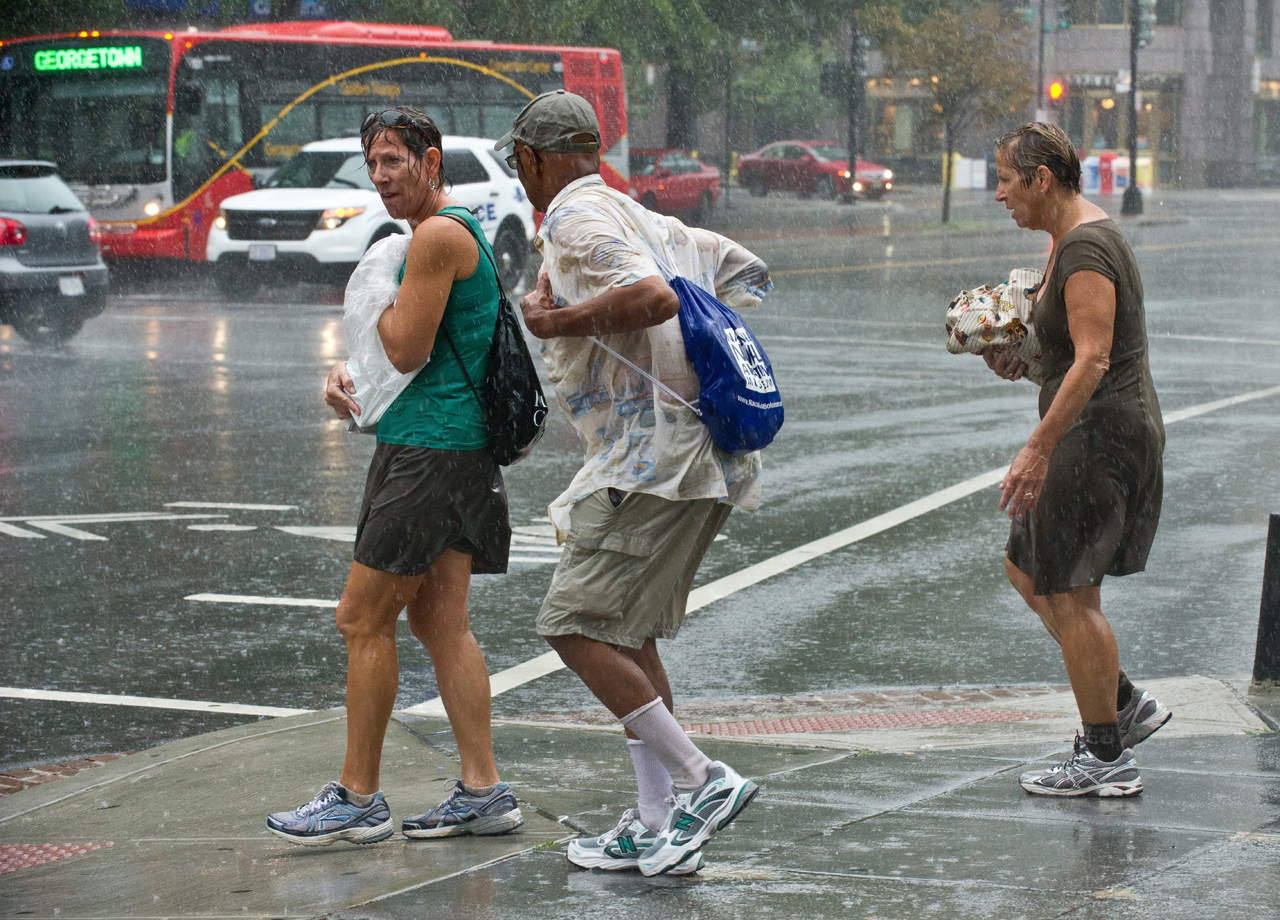 (CBS/AP) A string of severe storms hit the Northeast and Mid-Atlantic Saturday night, including two tornadoes that touched down in New York City and startled residents who often think of twisters as a Midwestern phenomenon.

The two tornadoes struck the edges of Brooklyn and Queens, sending debris flying and knocking out power but causing no serious injuries. The storms also forced sports games to cancel -- including the U.S. Open tennis tournament, which postponed the women's final to Sunday -- and caused widespread power outages in the tri-state area, Virginia, and other states along the East Coast.

Across New York state, in Buffalo, strong winds from a broad front of thunderstorms blew roofing off of some buildings and sent bricks falling into the street. More than 6,000 customers were without power in East in Warren County, another 1,500 or so were without power in other areas upstate, and about 3,000 customers in the Hudson Valley were affected. The storm in New York City knocked out power for about 1,100 residents.

Northern New Jersey was also badly hit by storms with heavy wind, hail and rain. Jersey Central Power and Light said roughly 8,000 customers had no electricity early Saturday night, while roughly 9,000 PSE&G customers had no service. It wasn't known when all the affected customers would have their power restored.

Winds reached up to 60 mph and flooded roads in Massachusetts, western Connecticut and parts of New Hampshire before fizzling out in Rhode Island. Roads flooded in Fall River, Mass., reaching up to car windshields and forcing dozens of vehicles stalled out. St. Anne's Hospital emergency room flooded. In New Hampshire, television station WMUR reported 4,000 power outages in that state.

The National Oceanic and Atmospheric Administration (NOAA) confirmed that a funnel cloud was also sighted in Chantilly, Va., and a second possible funnel cloud has been sighted in Forestville, Md The utility Dominion reports about 95,600 customers are without power in Virginia.

The first New York City tornado hit the beachfront in Rockaway, Queens Saturday morning. Videos taken by bystanders showed a funnel cloud sucking up water, then sand, and then small pieces of buildings, as the first moved through the Breezy Point section of the penninsula.

The National Weather Service confirmed later in the day that a second, stronger tornado touched down in Brooklyn 10 minutes after the first, at about 11:05 a.m. in the Canarsie section of Brooklyn. Videos taken by bystanders at the Queens beachfront on showed a funnel cloud sucking up water, then sand, and then small pieces of buildings, as it moved through the Rockaway peninsula.

Residents had advance notice. The National Weather Service had issued a tornado warning for Queens and Brooklyn at around 10:40 a.m. The storm took people by surprise anyway when it struck about 30 minutes later.

"I was showing videos of tornadoes to my 4-year-old on my phone, and two minutes later, it hit," said neighborhood resident Peter Maloney. "Just like they always say, it sounded like a train."

In the storm's wake, the community of seaside bungalows was littered with broken flower pots, knocked-down fences and smashed windows.

At the Breezy Point Surf Club, the tornado ripped the roofs off rows of cabanas, scattered deck chairs and left a heavy metal barbecue and propane tank sitting in the middle of a softball field, at least 100 yards from any nearby home.

"It picked up picnic benches. It picked up Dumpsters," said the club's general manager, Thomas Sullivan.

Half an hour later the weather was beautiful, but he had to close the club to clean up the damage.

Radar data, video and witness reports confirmed that the cyclone that hit New York City was a tornado, National Weather Service meteorologist Dan Hofmann said. He said an inspection team would assess the damage and before estimating the strength of the storm. Hofmann said some witnesses were reporting that the wind had been strong enough to lift cars off the pavement.

The NWS has issued a public severe weather advisory for much of the Northeastern United States for Saturday afternoon and evening.

The advisory said significant severe thunderstorms, including the development of widespread damaging winds and a few tornadoes, are expected across portions of the lower Great Lakes, New England and Mid-Atlantic States Saturday afternoon into tonight.

The strong upper-level weather system will interact with a moist and unstable air mass as it moves into the northeastern U.S.

Video taken by Roy Currlin shows a funnel cloud coming ashore at Breezy Point in Queens. Click on the video player below.

"It was crazy," said neighborhood resident Joseph Mure, who was in the shower when the storm hit, and went outside to snap a picture of the retreating funnel. "There were a lot of sirens going off. You could see it twisting."

Another video posted on YouTube by gerritsenbeach (click on the player below) shows what appears to be a funnel cloud at Breezy Point.

Lizann Maher, a worker at Kennedy's Restaurant at the edge of Jamaica Bay, said she saw a "swirling cone kind of thing with something flying in it" come down and then head back out into the water toward Brooklyn.

"It was scary. We have all glass so we kept saying, 'Get away from the glass!' just in case it did come back around," she said.

The Northeast and Mid-Atlantic storms were not the only dangerous weather in the country this weekend A storm system in Oklahoma Friday night killed four people, including a child.

4, including infant, killed in Okla. storms

State and local emergency managers are monitoring this developing situation. Those in the threatened area are urged to review severe weather safety rules and to listen to radio, TV and NOAA weather radio for possible watches and warnings.