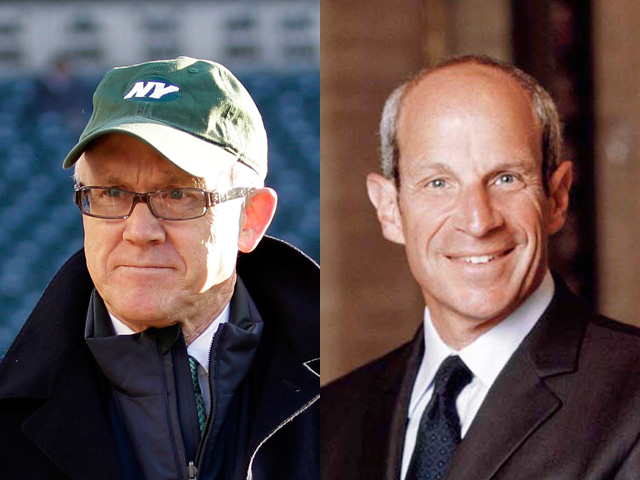 They're among a host of owners, executives, athletes and coaches from across the sports world supporting candidates in the 2012 election cycle.

Even the NFL and Major League Baseball have political action committees that are funded by sports owners and executives. They've donated to congressional members and the parties' congressional fundraising arms, but haven't picked a presidential candidate -- at least not yet.

It's no secret why the sports industry is weighing in.

Immigration policy, intellectual property rights, Internet gambling, and performance-enhancing drugs are among the issues connected to sports that Washington lawmakers address. The industry lobbies on those matters and more.

Johnson said the skills needed in football and in Washington aren't that much different.

"To win on the football field you have to not only have the best players and best coaches, but you have to be organized very well," Johnson said. "You have to have a sense of overall goals, but also manage the minute-by-minute and hour-by-hour operational skill."

Sometimes, fierce rivalries on the field may not mean dramatic differences in politics.

The Dallas Cowboys and Washington Redskins, for example, are both backing the GOP team in the presidential election. Dallas owner Jerry Jones has donated to Texas Gov. Rick Perry and Romney, while Redskins owner Daniel Snyder has contributed to Romney.

The Redskins also have a family connection to politics, with general manager Bruce Allen donating to brother George Allen, a Republican Senate candidate in Virginia, who wrote a book called "What Washington Can Learn from the World of Sports." The Allens are sons of the late Redskins coach George Allen, who was friends with President Richard Nixon.

Obama has a close connection to the NFL, tapping Pittsburgh Steelers owner Dan Rooney in 2009 to become ambassador to Ireland. Rooney, a lifelong Republican, campaigned for Obama in the 2008 election.

Pashos, whose team bio says he would like to run for office someday, has "Paul for President" bumper stickers flanking the nameplate on his locker.

Beck, in contrast, said he isn't out-front in expressing his political views in the locker room, lest it disrupt team harmony.

The NBA, which recently ended a potential season-killing lockout, is providing the biggest splash in politics -- but in Russia, not the U.S. The owner of the New Jersey Nets, Russian tycoon Mikhail Prokhorov, announced last month he will challenge Prime Minister Vladimir Putin in the March presidential election. If Prokhorov wins, he will join Milwaukee Bucks owner and U.S. Sen. Herb Kohl as owner-politicians, but for less than a year. Kohl, a Wisconsin Democrat, is not seeking re-election.

The end of the lockout will cost the Obama campaign some dough, at least for a few months. In December, more than two-dozen NBA players were to headline a fundraiser for the president, who is a huge basketball fan. But with players having to get ready for the season, which opened last month, the "Obama Classic" was postponed till this summer, during the offseason.

NBA players Vince Carter, Baron Davis and Chris Paul broke the news about the postponement in a recent letter to supporters who had purchased tickets for the event. Obama has already had fundraisers with NBA players, including one in October near Orlando, Fla., that featured Carter, Grant Hill and Boston Celtics coach Doc Rivers. Former basketball great Bill Russell has also headlined some Obama fundraisers.

Some NBA coaches are getting behind the president, including Mike D'Antoni of the New York Knicks, who has donated $5,000.

"I'm very political and I have strong views. Now, I'm also coach of everybody. I'm the New York Knicks coach so I've got to be careful with what it is," D'Antoni told the AP, but added that he wanted to be engaged. "I've got a kid that I don't want to leave more than $15 trillion in debt to."

Another Obama donor, Ted Leonsis, who owns the NBA's Washington Wizards and the NHL's Washington Capitals, has since criticized the president in a blog item called "Class Warfare- Yuck!"

Leonsis, who donated $35,800 to the Obama Victory Fund in June, wrote in the blog item three months later that Obama was wrong to talk about "millionaires and billionaires" who need to pay more in taxes.

"I voted for our president," he wrote. "I have maxed out on personal donations to his re-election campaign. I forgot his campaign wants to raise $1 billion. THAT is a lot of money-money-money-money! Money still talks. It blows my mind when I am asked for money as a donation at the same time I am getting blasted as being a bad guy! Someone needs to talk our president down off of this rhetoric about good vs. evil; about two classes and math."

Some sports figures who have made political donations for this year's elections: