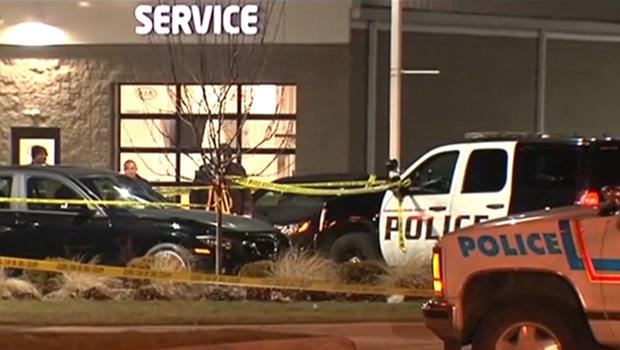 Matyas said the arrest occurred without incident. Officers found weapons and other evidence inside the vehicle, but Matyas would not provide details.

Authorities did not believe the victims were intentionally targeted and did not know of any link between the victims and the suspect, he said.

"This is your worst nightmare, where you have somebody just driving around, randomly killing people," Matyas told WWMT. "There's usually a rhyme or reason to it. In this particular case, we're not finding that. Hopefully when we interview the individual he'll disclose that to us."

The first shooting took place around 6 p.m. at the Meadow Townhomes apartment complex, where a woman was shot multiple times after walking outside. She was hospitalized in serious condition, WWMT reported.

Around 10:15 p.m., a father and son were killed outside a car dealership. A short time later, four people were shot dead in the parking lot of a Cracker Barrel restaurant. All of the victims were inside vehicles when they were shot, authorities said.

In addition to the six people killed, two others -- including a nine-year-old girl -- were in critical condition.

Based on witness interviews and surveillance video from the car dealership, authorities said they were searching for an older white male driving a dark blue Chevy HHR SUV. After the arrest, Matyas said that description helped police locate the suspect.

Kalamazoo is about 160 miles west of Detroit.