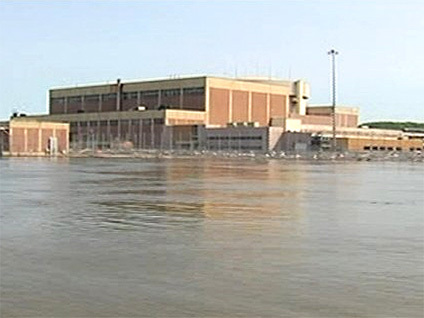 KANSAS CITY, Mo. — Several levees in northern Missouri were failing Sunday to hold back the surge of water being released from upstream dams.

Authorities said water — some of it from recent rain — began pouring over levees Saturday night and Sunday morning in Holt and Atchison counties, flooding farmland and numerous homes and cabins. A hole in the side of a Holt County levee continued to grow Sunday, deluging the state park and recreational area of Big Lake, a community of less than 200 people located 78 miles north of Kansas City.

Jud Kneuvean, chief of emergency management for the corps' Kansas City District, said the Missouri River dipped by almost one foot after the Big Lake breach but that the water level started to rise again by Sunday afternoon.

Meanwhile, the Nebraska Public Power District issued a flooding alert Sunday for its Cooper Nuclear power plant near Brownville, Neb., as the Missouri River continues to rise. The declaration is the least serious of four emergency notifications established by the federal commission.

The plant was operating Sunday at full capacity, and there was no threat to plant employees or to the public, said Mark Becker, a spokesman for the Columbus, Neb.-based utility.

The Fort Calhoun Station, another nuclear plant along the river in eastern Nebraska, issued a similar alert June 6. That plant near Blair, Neb., has been shut down since April and will not be reactivated until the flooding subsides.

The corps said Sunday that the river level at Brownville, Neb., had surged about 2 feet from Saturday morning to Sunday morning. Water was flowing over a levee there and into farmland but the levee was being built up to alleviate that, said Jodi Fawl, spokeswoman for the Nebraska Emergency Management Agency.

In Missouri, presiding Holt County commissioner Mark Sitherwood said U.S. 159 is closed south of Big Lake because water is pouring over the road, and most of the west side of the community is underwater.

"It's going through in one place that we know of and overtopped in numerous places and there is seepage everywhere," Sitherwood said.

He said most people evacuated well in advance of the flooding. Those who stayed were told Saturday night that water was flowing into the area. A few people live in cabins that have been built up and decided to stay, Sitherwood said.

"Everyone up here knows the routine," he said.

Juli and Steve Crenshaw, who were among those Big Lake residents who were remaining and using kayaks to get around, spent Saturday night scrambling to fix leaks in levees around the lake community.

After helping to shore up one levee they headed to another one.

"But when we got there with sandbags, the levee was gone," said Juli Crenshaw, whose basement was beginning to take on water. "It was too late. So we left there and went to another levee and started working to save it."

The Big Lake area, where water has been high for the past couple weeks, has experienced major flooding in three of the last five years. But Sitherwood said this year promises to be much worse following weeks of high flows and increasing releases from the main stem dams in Montana and the Dakotas.

"I know they wouldn't admit it, but this is a manmade event," said Sitherwood, echoing a sentiment common in the area that the Army Corps of Engineers is mismanaging the Missouri River.

The commissioner said his own home is at risk. "Thank you Corps of Engineers," he said.

The corps has said unusually heavy rains, not mismanagement, are to blame.

"What we are dealing with is a massive weather system that put a lot of precipitation in the system," U.S. Army Corps of Engineers spokesman Kevin Wingert. "The end result is that water has to go somewhere."

In neighboring Atchison County, there was a nearly steady flow of water over a half-mile stretch of a levee near U.S. 136 and overtopping at various points to the north that area, said Mark Manchester, deputy director of emergency management for the county. He said the water was flooding several thousand acres of farmland, but so far no homes had been inundated since a breach this past Monday caused about a dozen homes to take on water.

Because of the high waters, U.S. 136 was closing near the Missouri-Nebraska border.

Manchester said the river level has reached 44.6 feet, the highest on record and about 4 to 5 inches higher than 1993 flooding levels. He said minor flooding starts at 33 feet and major flooding at 43 feet.

He said residents in the area had already evacuated their homes, and officials who operate the levee went up in a helicopter and saw several "pretty good size holes starting to form."

The officials are predicating another breach, which could displace up to 200 more people.

"That would be worse case scenario," he said. "The information we are getting from the corps is that it's possible."