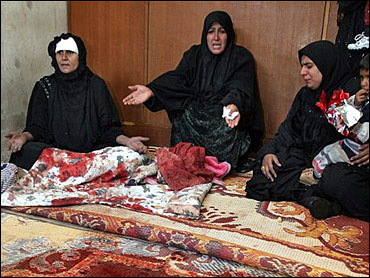 U.S. and Iraqi forces backed by helicopters swept into Baghdad's Sadr City Shiite slum in a dark-of-night raid Tuesday that netted seven militiamen, including one believed to know the whereabouts of an American soldier kidnapped nearly a month ago.

Angry Shiites denounced the raid and a man from the district stood outside the Imam Ali hospital, holding the body of a boy killed in the attack.

The dead child's father and mother were both injured in the raid. His uncle is a member of the Iraqi parliament, CBS News correspondent Elizabeth Palmer reports, and now he says there's no way he's going to help govern the broken country.

Police said three Iraqis, including the boy, were killed and 15 wounded. No soldiers were hurt, the military said.

The raid came just weeks after Prime Minister Nouri al-Maliki, a Shiite, had taken on the role of protector of the sprawling Sadr City district by ordering the U.S. military to lift a blockade of the slum.

American forces had sealed the district for several days looking for kidnapped U.S. soldier Ahmed Qusai al-Taayie, a 41-year-old reservist from Ann Arbor, Mich. He was visiting his Iraqi wife in Baghdad on Oct. 23 when he was handcuffed and abducted by suspected rogue gunmen from the Mahdi Army, a militia loyal to radical Shiite cleric Muqtada al-Sadr.

The 3 a.m. assault in the east Baghdad grid of streets lined with tumbledown concrete block structures and vacant lots was the third in four days by U.S. and Iraqi forces.

The U.S. command said Iraqi forces came under fire during the raid, and that U.S. aircraft returned fire.

The operation "detained an illegal armed group kidnapping and murder cell leader... reported to have firsthand knowledge of the control and movement" of al-Taayie, the military said, adding that six other cell members also were detained.

Al-Sadr is a major political backer of al-Maliki, who had rejected American demands to disband the heavily armed militias and their death squads that have carried out a brutal campaign of revenge attacks on Iraq's Sunni minority in a cycle of violence following the Feb. 22 bombing of a Shiite shrine.

Al-Maliki, however, looked the other way during most recent joint U.S.-Iraqi raids, an about-face his aides said was prompted by anger over the U.S. soldier's abduction and a mass kidnapping carried out this month by suspected Mahdi Army gunmen.

After Tuesday's raid, a Shiite legislator Saleh Al-Ukailli cradled the body of the dead child outside the hospital morgue and angrily condemned Iraq's government for allowing such attacks.

"I am suspending my membership in parliament since it remains silent about crimes such as this against the Iraqi people," al-Ukailli said. "I will not return to parliament until the occupation troops leave the country."

The boy's body was wrapped in a bloodstained cloth, with only the face visible. Nearby, minivans left with two wooden caskets on their roofs.

Al-Ukailli is one of 30 legislators in Iraq's 275-seat parliament who follow al-Sadr, whose main offices are in Sadr City.

In parliament, Iraq's brutal sectarian conflict had Sunni and Shiite legislators trading blame for the relentless bloodshed in the streets.

The shouting started when Shiite legislator Jalal al-Saghir said the Iraqi army should be deployed in Baghdad's predominantly Sunni Adil and Jamiaa neighborhoods to prevent attacks on Shiites, the majority nationwide but the minority in those areas.

The dean of the Sunni bloc, Adnan al-Dulaimi, who lives in Adil and whose Iraqi Accordance Front holds 44 seats, took it personally.

"Sheik Jalal is one of those who incite sectarian strife. I wish he wouldn't speak this way. It's a conspiracy!" al-Dulaimi shouted. "When he speaks about the Adil neighborhood, it means he is speaking about me."

"We have extended our hands to you (Shiites) for the good of Iraq. We ask you to respect us, to respect our existence. But, as I have said before, you here in parliament treat us as if we were fire worshippers or Jews," al-Dulaimi said.

After more angry outbursts during which his hands visibly shook, al-Dulaimi stormed out of the chamber.

On Monday, al-Maliki charged that some parliament members had links to the militias and "terrorists" who are stoking violence. The prime minister said those lawmakers, whom he did not name, should resign.

As the verbal clashes tapered to a close, Kurdish politician Mahmoud Othman said "what we heard from the brothers here and what you see in the Iraqi streets of blood, killing and kidnapping all indicate the seriousness of the political crisis."