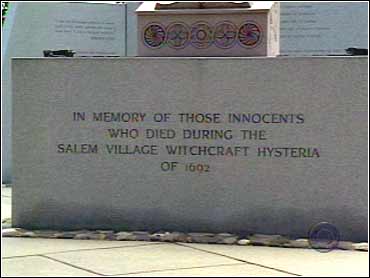 Just a few days ago, just like every Friday the 13th, there was something in the air in Salem, Massachusetts.

It's hard to tell these days, but Salem's main attraction, its historical hysteria about witches, resulted from a great injustice more than three centuries ago. And this year as CBS News Correspondent Richard Schlesinger reports, talk around town is on finally correcting a wrong.

"There were 14 women and five men here who were executed," said Salem resident Paula Keene.

Keene grew up on what is still known as Gallows Hill where the alleged witches were hanged in 1692. Since then all of them have been pardoned by name…all but five.

Nobody thinks that were these women witches anymore, so what's the point? As Keene explains, “History proves they weren't witches.”

Keene is on a mission to find a way to pardon the five women and Massachusetts State Representative Paul Tirone has agreed to take up the issue.

“She is obviously a great multi-grandmother,” said Craig Martin.

Craig Martin traces his ancestry back eleven generations to Susanna Martin, one of the women hanged and mentioned in Tirone's bill.

“I just think it is the final step in clearing up her name and setting the record straight,” said Martin.

It's more than that for Paula Keene who's been bothered and bewildered by history's omission.

"Technically they are still hanging on Gallows Hill and it is time to cut the noose loose," said Keene.

The Salem witch-hunt still draws tourist, 309-years-later. Tourist are amused by the legend of this place and unfazed by five old name; legal leftovers of a long ago injustice.