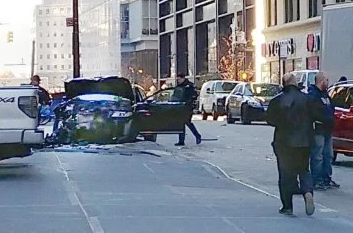 NEW YORK -- At least six people were hurt when a car ended up on a sidewalk after crashing into two other vehicles in Lower Manhattan.

CBS New York reports the collision occurred around 1:20 p.m. Thursday afternoon when a Lincoln Town Car and Ford Explorer collided at Broadway and Liberty Street near Zuccotti Park. The SUV then struck a person on a bike.

The Lincoln kept going down Liberty Street before crashing into the back of a third vehicle and jumping a curb.

Police said the crash is being investigated as an act of road rage. The driver of the town car is in custody and being questioned.

"The area of Broadway & Liberty is completely safe," the NYPD's Mark Iocco tweeted. "We have traffic closed in all directions so we can conduct an investigation on the collision with @NYPDTransport & @NYPDHighway - avoid driving in the area because of the closure."

The area was the site of police activity over a suspicious package earlier Thursday, although there is no indication the incidents are related. Police gave the all-clear after a sweep by a bomb squad.