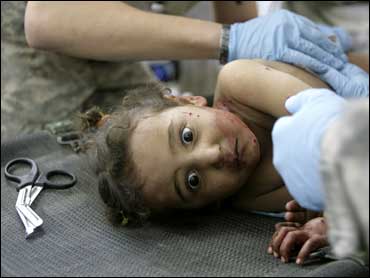 Three car bombs exploded in quick succession Wednesday at the main market of a southern Shiite city, killing at least 41 people and wounding 150 others, police and local government officials said. It was the deadliest attack against Iraqi civilians in four months.

The devastating blasts in Amarah, an oil-producing city largely spared from sectarian bloodshed, occurred only days before Britain was expected to hand over a neighboring southern province - the last remaining under British control since the 2003 invasion.

Fears are rising about whether Iraq's mostly Shiite security forces can control Shiite militias that are competing for power in the oil-rich south, even as U.S. officials report dramatic falls in violence nationwide.

American commanders fear that al Qaeda and other extremists might try to exploit the security gap by attempting spectacular attacks against Shiite civilians in less-protected areas outside Baghdad - especially where there is little coalition military presence.

No group claimed responsibility for the Amarah bombings, which occurred minutes apart at the entrance to the main market in the city, 200 miles southeast of Baghdad.

CBS News correspondent Jeff Glor reports the blasts follow a recent pattern, in which militants hide multiple devices near one another, to kill people who respond to the first blast.

Bystanders rushed to help victims of the first blast, only to suffer death or injury in the explosions that followed, police and witnesses said.

Car bombs are the a signature weapon of al Qaeda and other Sunni extremists, which are seeking new sanctuaries after being driven out of the Baghdad area.

But such groups have had virtually no presence in Amarah and the surrounding Maysan province, where there are few Sunni communities to offer them shelter.

Instead, rival Shiite militias, some believe backed by Iran, pose the biggest security threat in the south. That threat has drawn new attention since Britain announced plans to draw down on its military presence in the south.

In a few days, Britain is expected to turn over the last southern province - oil-rich Basra, long rocked by militia turf battles. Maintaining security in Basra, the focal point of Iraq's vast oil wealth, represents a major test for Iraqi security forces, which have been infiltrated by Shiite militias.

Prime Minister Nouri al-Maliki, who was visiting nearby Basra to discuss reconstruction issues, called the Amarah attack a "desperate attempt" to draw attention away from "the clear successes" in the battle to restore stability.

Al-Maliki, a Shiite, urged the people of Amarah to exercise restraint and avoid revenge attacks against the "terrorists who do not want Iraq to stand up again."

The police chief in Amarah was fired after the deadly explosions, and Iraqi soldiers deployed on the streets. Hospital were overwhelmed with the casualties, which mounted as bodies were pulled from the rubble, according to a provincial spokesman.

The blasts began with a small explosion at the entrance to the market, said Mohammed Saleh, a provincial council spokesman. Saleh said bystanders rushed to the scene to care for the handful of wounded when a second car bomb exploded. The third car blew up nearby as the crowd began to flee, he said.

Public markets in Baghdad and other flashpoint cities are surrounded by blast walls and shoppers are searched upon entering. No cars are allowed to park nearby.

Before the Wednesday blasts, however, Amarah and the surrounding province accounted for less than one percent of the civilian casualties reported this year, according to a count by The Associated Press. Saleh said no security measures were in place Wednesday.

"There was not a single police car in the street at the time of the explosion," he said. "The provincial council complained many times to the police chief about the lack of security measures in the city, but he would not listen."

In other recent developments:
Salam Hussein Jabr, who runs a travel agency in Amarah, said the blasts could be felt a half-mile away. He said the blast shook his windows and knocked pictures off the wall as he ran into the street to see what had happened.

"This is the first time we've gone through anything like this," said Jabr, a 44-year-old father of three.

Jabr said people thought the first blast was a mortar attack. Then they heard the second blast.

Black smoke billowed over the concrete skyline and flames shot out of cars. Rescue crews worked to evacuate the victims while sandals apparently lost in the rush lay near pools of blood on the pavement.

Saleh said 41 people were killed and 150 wounded in the triple explosions. He said local hospitals were so overwhelmed that they were turning away people whose injuries were not considered critical. He earlier said police imposed an indefinite driving ban, and Iraqi soldiers were sent out into the streets.

In Baghdad, the Interior Ministry spokesman Maj. Gen. Abdul-Karim Khalaf said the police chief was fired. A provincial official, speaking on condition of anonymity because of the sensitivity of the matter, said the police chief ignored warnings Dec. 4 about possible terrorist attacks in Amarah.

U.S. officials have warned recently that al Qaeda might attempt a major attack against Shiite civilians to try to provoke new sectarian bloodshed. In August, four suicide bombers hit a Kurdish-speaking Yazidi community in northwest Iraq, killing some 500 people in the deadliest attack of the war.

Philip Reeker, the U.S. Embassy spokesman, said recent attacks in Amarah and elsewhere highlighted the dangers still facing Iraq, despite the decline in violence around the capital.

"We are by no means declaring a victory against those who would like to disrupt the progress in Iraq," Reeker said at a press conference in Baghdad.

Although the south has been spared the massive violence that rocked Baghdad and other areas, fears have been rising ever since Britain announced plans to draw down its troops to only 2,500 by the middle of next year.

The concern is that Iraq's mostly Shiite security forces will be unwilling or unable to rein in the Shiite militias, who have been competing for power throughout the southern Shiite heartland. Those militias have close ties to Shiite parties in the national government.

Two southern provincial governors and several senior police officers have been assassinated in recent months in what appear to be part of the internal Shiite power struggle.

British Prime Minister Gordon Brown, who was in southern Iraq this week to meet with British troops, was challenged Wednesday in the House of Commons to explain what the acting Liberal Democrat leader called "the continuing tragedy in Iraq."

"Is this why 173 British troops have died, transferring power from the fascist regime of Saddam Hussein to the terror of the fascist militia who run the streets of Basra?" asked Vincent Cable, the Liberal Democrat.