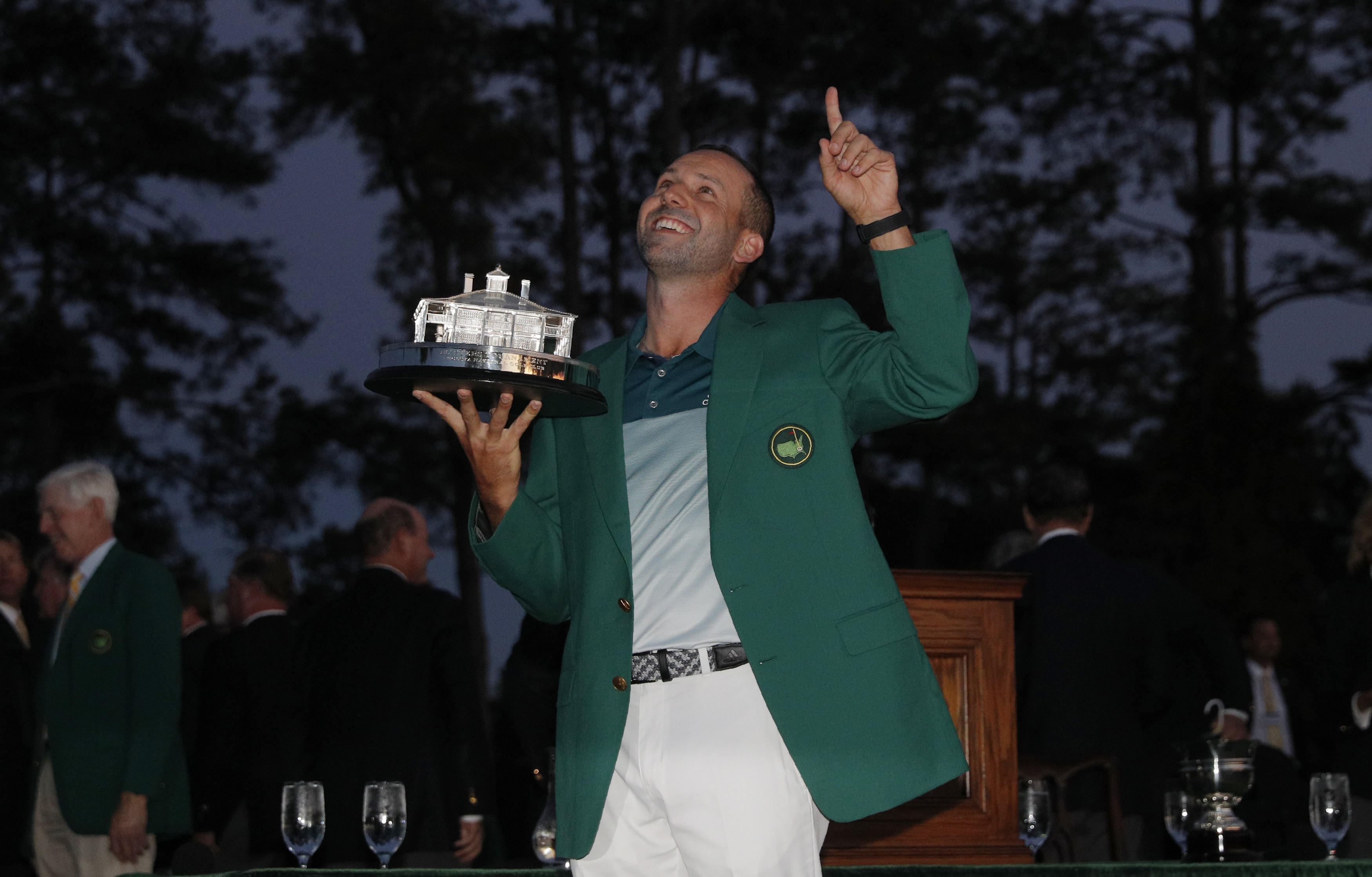 AUGUSTA, Ga. -- Sergio Garcia tugged the lapel of his green jacket with both hands, proud of his prize and how he earned it.

His hopes were fading Sunday in the Masters -- two shots behind with six holes to play -- when his tee shot bounced off a tree and into an azalea bush, the kind of bad luck he had come to expect in the majors. Instead of pouting, he figured out how to make par.

Five feet away from winning, his birdie putt peeled off to the right. Usually resigned to fail, Garcia proved to be more resilient than ever.

He was a new man with a new title: Masters champion.

“It’s been an amazing week,” Garcia said, “and I’m going to enjoy it for the rest of my life.”

After nearly two decades of heartache in the tournaments that define careers, Garcia finally showed the mettle to win a major. He overcame a two-shot deficit against Justin Rose and won on the first hole of a sudden-death playoff.

No one ever played more majors as a pro (70) before winning one for the first time.

Garcia got rid of the demons and the doubts with two big moments on the par 5s -- one a par, the other an eagle -- in closing with a 3-under 69. It was never easy until the end, when Rose sent his drive into the trees on the 18th hole in the playoff, punched out and failed to save par from 15 feet.

That gave the 37-year-old Spaniard two putts from 12 feet for the victory, and his putt swirled into the cup for a birdie. He crouched in disbelief, and shouted above the loudest roar of the day.

Rose, who also closed with a 69, lovingly patted Garcia’s cheek before they embraced. Rose then tapped Garcia on the heart, which turned out to be a lot bigger than anyone realized.

“Ser-gee-oh! Ser-gee-oh!” the delirious gallery chanted to Garcia, who couldn’t contain his emotion.

Garcia turned with his arms to his side, blew a kiss to the crowd and then crouched again and slammed his fist into the turf of the green.

All that Spanish passion was on display, raw as ever, this time sheer joy.

Garcia became the third Spaniard in a green jacket, winning on what would have been the 60th birthday of the late Seve Ballesteros. And it was Jose Maria Olazabal, who won the Masters in 1994 and 1999, who sent him a text on the eve of the Masters telling Garcia to believe and “to not let things get to me like I’ve done in the past.”

“It’s amazing. To do it on [Seve’s] 60th birthday and to join him and Olazabal, my two idols in golf my whole life, it’s something amazing,” Garcia told Jim Nantz on CBS after the win. “Jose sent me a text on Wednesday night telling me how much he believed in me and what I needed to do and just pretty much believing in myself and being calm and not let things get to me like I’ve done int he past.”

His chin was up and he battled to the end.

“If there’s anyone to lose to, it’s Sergio. He deserves it,” Rose said. “He’s had his fair share of heartbreak.”

This was shaping up as another, especially after Garcia watched a three-shot lead disappear as quickly as it took Rose to run off three straight birdies on the front nine.

Tied going to the back nine, Garcia immediately fell two shots behind with wild shots into the pine straw bed under the trees. Rose was poised to deliver a knockout on the par-5 13th when Garcia went left beyond the creek and into a bush. He had to take a penalty shot to get out and hit his third shot 89 yards short of the green. Rose was just over the back of the green in two, on the verge of turning a two-shot lead into four.

Everyone figured this was coming, right? Garcia himself had said, in a moment of self-pity, that he didn’t have what it takes to win a major. Four times he was runner-up. This was his third time playing in the final group.

But right when it looked to be over, momentum shifted to Garcia.

He hit wedge to 7 feet and escaped with par. Rose rolled his chip down to 5 feet and missed the birdie putt. The lead stayed at two shots but not for long. Garcia birdied the 14th. His 8-iron into the par-5 15th landed inches in front of the hole and nicked the pin, and he holed the 14-foot eagle putt to tie for the lead.

Rose took the lead with an 8-foot birdie on the 16th and gave it back by missing a 7-foot par putt on the 18th.

Not since 1998 have the last two players on the course gone to the 18th tied for the lead, and both had their chances to win. Rose’s approach hit off the side of the bunker and kicked onto the green, stopping 7 feet away. Garcia answered with a wedge that covered the flag and settled 5 feet away.

The playoff didn’t last long. Rose was in trouble from the start with an errant tee shot, and Garcia didn’t waste the opportunity.

Former Masters champion Charl Schwartzel birdied the 18th for a 68 to finish third. Matt Kuchar made a hole-in-one on the 16th that gave him hope but not for very long. He tied for fourth with Thomas Pieters, who ran off four birdies on the back nine.

Jordan Spieth, starting the final round only two shots behind, put another tee shot into the water on No. 12 long after it mattered. He had to birdie three of his last four holes for a 75. Also an afterthought was Rickie Fowler, who started one shot behind and shot 76.

All that mattered was Garcia and Rose, who delivered a final hour as compelling as any at Augusta National.