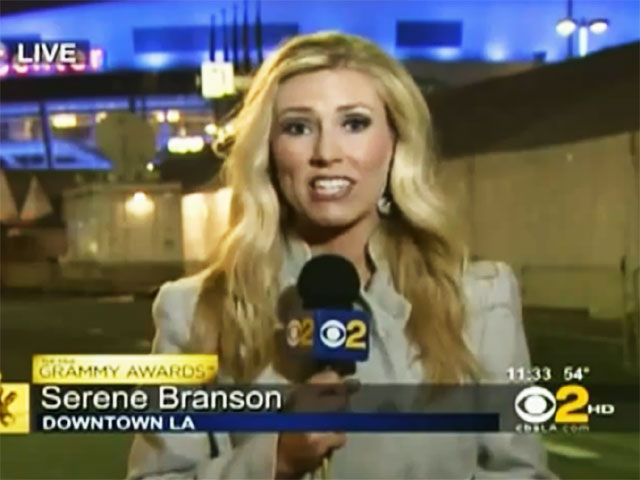 Update12:34 a.m.: The video of this incident is no longer available on YouTube

(CBS) Hours after experiencing an unsettling on-air inability to speak while covering the Grammys last night, Serene Branson is said to be feeling fine.

"Serene Branson was examined by paramedics on scene immediately after her broadcast," Branson's station, KCBS, said in a statement. "Her vital signs were normal. She was not hospitalized. As a precautionary measure, a colleague gave her a ride home and she says that she is feeling fine this morning."

The reassuring news comes as a surprise to some, given the worrisome nature of Branson's inability to articulate real words. She started her report by saying, "A very heavy blurtation tonight" before her speech devolved into complete gibberish.

"I am a little surprised," Dr. John Krakauer, associate professor of neurology and neuroscience at Johns Hopkins School of Medicine in Baltimore, told CBS News. "Frankly, I would have admitted her."

Dr. Krakauer, who is not involved in Branson's care, said that Branson might have suffered a transient ischemic attack (TIA), a sort of "mini-stroke" that causes only transient problems. Some patients who are seen at a hospital for a TIA are allowed to go home without being admitted, he said.

He said it was also possible that Branson had suffered a seizure or experienced a rare condition associated with migraine headaches.

But whatever happened to Branson, Dr. Krakauer said her problem should serve as a reminder that stroke can happen even to young people. In fact, he said, each year in the U.S. about 50,000 people under the age of 50 have a stroke.

In addition to sudden problems thinking of or saying words, symptoms of stroke include a drooping face, the loss of vision in one eye, or the loss of movement or sensation on one side of the body.

The American Heart Association offers more on the warning signs of stroke.