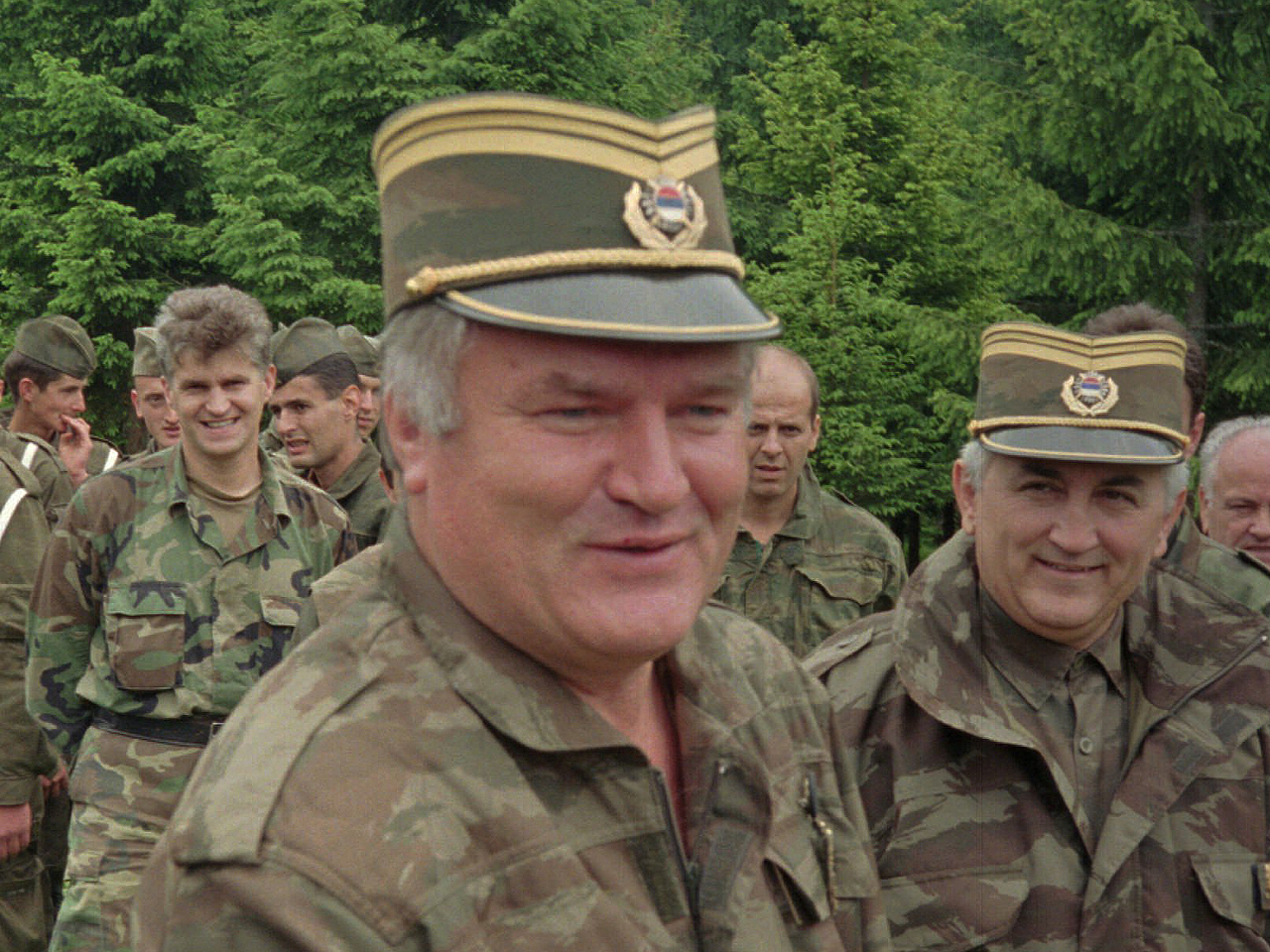 BELGRADE, Serbia - Ratko Mladic, the ruthless Bosnian Serb military leader charged with orchestrating Europe's worst massacre of civilians since World War II, was arrested at a relative's home in a tiny Serbian village on Thursday after a 16-year hunt for the architect of what a war-crimes judge called "scenes from hell."

Mladic's dawn arrest removed the most important barrier to the Western-leaning Serbian government's efforts to join the European Union and to rehabilitate the country's image as a pariah state that sheltered the men responsible for the worst atrocities of the Balkan wars of the 1990s.

Mladic had two pistols when he was arrested but offered no resistance, and he appeared shrunken, bald and pale, Serbian officials and media said.

"We have ended a difficult period of our history and removed the stain from the face of Serbia and the members of our nation wherever they live," President Boris Tadic said in a triumphant press conference announcing the arrest.

Tadic said Serbia had begun the process of extraditing the former general to the U.N. war crimes tribunal in The Hague, Netherlands. Mladic, 69, faces life imprisonment if tried and convicted of genocide and other charges. The U.N. court has no death penalty.

Rasim Ljajic, a government minister in charge of cooperation with the U.N. tribunal, said "Mladic looked like an old man" when he was arrested.

"One could pass by him without recognizing him," Ljajic said.

"He was pale, which could mean he rarely ventured out of the house — a probable reason why he went unnoticed," he said.

Ljajic said said Mladic had two handguns in his possession, but did not resist the arrest and "was cooperative."

"He spoke normally to the members of the security services," Ljajic said.

Belgrade B-92 radio said one of Mladic's arms was paralyzed — probably the result of a stroke.

Serbian police said they have banned all gatherings and raised security levels throughout the country in case of violent nationalist reaction to the arrest.

The nationalist Serbian Radical Party said Mladic is a "hero" and described his seizure as "one of the hardest moments in Serbian history."

The extreme-right group 1389 said the arrest was "a treason" and called on citizens to pour into the streets and protest.

Foremost among the horrors Mladic is charged with is the July 1995 slaughter of up to 8,000 Muslim men and boys in the Bosnian town of Srebrenica, which was supposed to be a safe zone guarded by Dutch peacekeepers.

A bullnecked field commander with narrow, piercing blue eyes, Mladic seized the town and was seen handing candy to Muslim children in the town's square. He assured them everything would be fine and patted one boy on the head. Hours later, his men began days of killing, rape and torture.

War crimes tribunal judge Fouad Riad said during Mladic's 1995 indictment in absentia that the court had seen evidence of "unimaginable savagery: thousands of men executed and buried in mass graves, hundreds of men buried alive, men and women mutilated and slaughtered, children killed before their mothers' eyes, a grandfather forced to eat the liver of his own grandson."

"These are truly scenes from hell, written on the darkest pages of human history," he said.

But even as Balkan war-crimes fugitives such as Radovan Karadzic and Slobodan Milosevic were brought to The Hague, Mladic was idolized and sheltered by ultranationalists and ordinary Serbs despite a 10 million euro ($14 million) Serbian government bounty, plus $5 million offered by the U.S. State Department.

He was known to have made daring forays into Belgrade to watch soccer games and feast on fish at an elite restaurant.

In a particularly brazen touch, he had been using the alias Milorad Komadic, an anagram of his true identity, police said.

Before sunrise, agents of Serbia's domestic intelligence agency moved quietly on Mladic's hideout, a single-story yellow brick house owned by a relative of the fugitive's mother, said Radmilo Stanisic, the de facto mayor of Lazarevo, a village of some 2,000 residents about 60 miles (100 kilometers) northeast of Belgrade.

"They didn't even wake us up," said a resident who identified himself only as Zoran. "I'm furious. They arrested our hero."

A sign reading "Mladic Hero" was posted on the entrance of the village as police vehicles guarded the house where Mladic was arrested.

Serbia's B-92 radio said Mladic did not resist the arrest and "was cooperative."

Justice officials in The Hague said it will take at least a week before Mladic is handed over.

Regular reports on Serbia's compliance with the chief U.N. war crimes prosecutor are crucial for its efforts to become an EU member candidate. The prosecutor, Serge Brammertz, had long complained that authorities were not doing enough to capture Mladic and other war-crimes fugitives.

On Thursday, Brammertz called justice for the victims of Mladic's alleged crimes in Bosnia "long overdue."

In Bosnia, the arrest was welcomed by the head of a group of victims' family members formed to keep the pressure on war crimes investigators. But, added Munira Subasic, "I'm sorry for all the victims who are dead and cannot see this day."

In Brussels, NATO Secretary-General Anders Fogh Rasmussen said the arrest "finally offers a chance for justice to be done." The White House said Mladic's capture shows that justice eventually will come to those who perpetrate crimes against humanity.

In a message from his U.N. cell, Karadzic said he was sorry Mladic has been arrested and wants to work with him "to bring out the truth" about the Bosnian war.

Karadzic's American lawyer Peter Robinson called The Associated Press to relay the message shortly after visiting Karadzic in the Hague detention unit that he will soon share with Mladic.

Croatian media, which first broke the story, said police there got confirmation from their Serbian colleagues that DNA analysis confirmed Mladic's identity.

Mladic was born on March 12, 1942, in the southeastern Bosnian village of Bozinovci. He was two when his father, a World War II guerrilla fighter, was killed, allegedly by Croat pro-Nazi forces. He graduated from Belgrade's prestigious military academy and joined the Yugoslav Communist Party in 1965.

Embarking on an army career when the former Yugoslavia was still a six-state federation, Mladic rose steadily through the ranks, making general before the country's breakup in 1991.

When Yugoslavia began unraveling in war, Mladic was in Croatia leading Yugoslav troops in the Serb controlled enclave of Knin. He is believed to have played a crucial role in the army bombardment of the coastal city of Zadar.

A year later, he assumed command of the Yugoslav Army's 2nd Military District, which effectively became the Bosnian Serb army.

Appointed in 1992 by Karadzic, Mladic led the Bosnian Serb army until the Dayton accords brought peace to Bosnia in 1995.

Obsessed with his nation's history, Mladic saw Bosnia's war as a chance for revenge against 500 years of the Ottoman Turks' occupation of Serbia. He viewed Bosnian Muslims as Turks and called them that as a racial slur.

Mladic was indicted two weeks after the Srebrenica massacre together with Karadzic, who vanished later that year. Serbian security forces captured Karadzic in Belgrade on July 21, 2008.

The Hague tribunal accused the pair of command responsibility for numerous atrocities committed during Bosnia's 1992-95 war, which killed more than 100,000 people and drove another 1.8 million from their homes.

Thousands of Muslims and Croats were killed, tortured or driven out in a campaign to purge the region of non-Serbs during Karadzic's wartime leadership. Mladic was Karadzic's top general, familiar worldwide from TV footage of the beefy man in combat fatigues.

Mladic commanded fierce devotion among his men, and many Bosnian Serb soldiers pledged to follow him to the death. Mladic's bodyguards once said he had made a death pact with one of them to shoot him rather than let him be captured.

He enjoyed basking in the adoration of his admirers during military parades, and rubbing shoulders with U.N. commanders in Bosnia before he became a fugitive.

Mladic was dismissed from his post in December 1996 by Biljana Plavsic, then president of the Bosnian Serb republic. In February 2003, Plavsic was sentenced to 11 years in prison for persecution, a crime against humanity. U.N. prosecutors had dropped seven other charges against her, including genocide.

When in the late 1990s his trail grew too hot in Bosnia, Mladic moved with his family to Belgrade, where he lived free in a posh suburban villa.

In Belgrade, he showed up at soccer games, dined in plush restaurants and frequented elite cafes, refusing to give interviews and smiling quizzically when he happened to be photographed.

When the late Serbian strongman Slobodan Milosevic was ousted in October 2000, and the country's new pro-democracy authorities signaled they might hand Mladic over to the tribunal, Mladic was rumored to have returned to Bosnia.

But the flamboyant Mladic made a few daring forays back into Belgrade. In June 2001, he was seen dining in a well-known fish restaurant frequented by foreign diplomats in the Serbian capital.

Although he went underground in 2002, as recently as 2004, Mladic was seen driving a battered, boxy Yugo car in Belgrade — without the six black-clad bodyguards with shaven heads who typically escorted him.

Authorities recorded the last trace of Mladic living in Belgrade in January 2006, said Ljajic, a member of a government team hunting the ex-general.

"And then, he vanished," Ljajic said.

Under an indictment last amended in November 2009, the U.N. war crimes tribunal has filed these charges against Mladic: