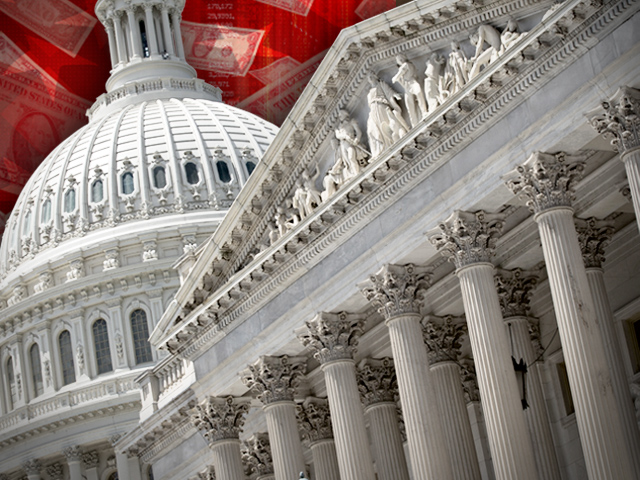 Tomorrow, barring a last-minute Washington miracle, President Obama will officially order the highly-anticipated, much-dreaded "sequestration" - an across-the-board set of budget cuts totaling $1.2 trillion from defense and non-defense spending over the course of the next ten years. The administration has been vehement in its calls for Congress to find a way to avert the legally-mandated package: The cuts, Mr. Obama says, will result in hundreds of thousands of lost jobs, crippling losses for the nation's public education system, defense cuts that would leave the country unprepared for future military engagements, and a number of day-to-day inconveniences, like long lines at the airport and the shuttering of some public parks.

As sequestration officially becomes law of the land, however, its impacts won't immediately be clear: Despite warnings of an economic turndown, cuts for 2013 will be rolled out over the next several months, triggering a government slowdown that will hit different agencies with various degrees of speed and impact as time goes on. And its toll, whatever it ends up being, will likely be drawn out and murky, with sources nearly unidentifiable to the average voter.

"It will be like a rolling ball," said Homeland Security Secretary Janet Napolitano, of the manner in which the cuts will impact the economy, in remarks to reporters this week. "It will keep growing."

What will happen on March 1?

According to the Budget Control Act of 2011, sequestration will cut $85 billion from the federal budget in the remainder of the 2013 fiscal year, slashing about $1.1 trillion more over the next decade. The White House has recently released a slew of memos detailing what they believe those cuts would look like on both a state and program level:

According to the White House, that means "10,000 teacher jobs would be put at risk, and funding for up to 7,200 special education teachers, aides, and staff could be cut"; loans to small businesses would be reduced by up to $540 million; research and development would be stalled as thousands of researchers and scientists would be at risk of losing their jobs; and "up to 373,000 seriously mentally ill adults and seriously emotionally disturbed children could go untreated," among other impacts.

Those calculations, however, assess the impacts of sequestration over the course of the fiscal year. But assigning and implementing those reductions will take time, and agencies will presumably do their best to blunt or delay the impacts of the reductions, moving money around, reassigning carry-over funds, delaying the announcement of new contracts and grants, and taking advantage of whatever flexibility they have.

Ultimately, however, agencies will be forced to make choices about where to make cuts. Various departments have already implemented preemptive hiring freezes, and have begun to pinpoint ways to save; they've also identified those areas they say cannot afford to take the hits, and that they'll try to protect from sequestration.

"Under sequestration we're going to keep fully supporting our troops downrange but we're going to see a really pernicious erosion of military readiness of facility readiness and modernization stateside," said Elizabeth Robbins, a spokesperson for the Department of Defense, in an interview with CBSNews.com.

For Robbins' department, that means prioritizing operations and maintenance over research and development, she said, resulting in cutbacks on training not directly related to upcoming missions, the cancellation of some ship and aircraft maintenance in March, and the furlough of nearly 800,000 civilian employees at least one day a week. Robbins argued the furloughs would cause pain not just for the employees - who would be seeing a 20 percent pay cut - but also for the department's operational productivity.

The Federal Aviation Administration (FAA) has also detailed the prospect of furloughs, which representatives say will likely result in the elimination of late-night shifts at around 60 air traffic control towers, and lead towers at 100 small airports to close altogether. The FAA estimates that flights to major cities like New York, Chicago, and San Francisco could be delayed by up to 90 minutes during peak travel hours, which would lead the airlines to preemptively cancel flights.

The Departments of Transportation (DOT) and Homeland Security, as well as the Transportation Security Administration (TSA), and others have warned of similar consequences: Fewer jobs, longer lines.

Most of these changes, however, won't take place until April. Legally, federal employers must notify their employees of a furlough 30 days in advance, which means no furloughs will go into effect until April 1 at the earliest. Moreover, not every agency has identified how it will implement the cuts; the Office of Management and Budget (OMB) plans to release a report on the specifics of agency cuts on March 1, at which point the appropriate actors will have to figure out how to implement. In some cases, working out those details will take time. In the meantime, a group of Republicans has proposed legislation that would give the Obama administration more flexibility in divvying up the cuts - a plan that, if implemented, would ostensibly require yet more decision-making, and more time.

There will, however, be a few immediate effects.

According to an OMB official, as of March 1, the Treasury Department and IRS will have to reduce payments that subsidize clean energy investments, school construction, state and local infrastructure projects, and other priorities.

A number of school districts will also be hit: While the majority of educational funding will not be affected until the 2013-2014 school year, so-called "impact aid" districts - those located on federal property and thus don't have a traditional tax base - will be hit on March 1.

According to Daren Briscoe, a spokesman for the Department of Education, about 1,200 impact aid districts, many of which are on military bases or Native American lands, will be faced with a cumulative $60 million worth of cuts. Of those districts, Briscoe says about 23 have been designated "heavily impacted," which means they get about half of their funding per student from the federal government.

Despite Democratic doomsday warnings, some Republicans -- though still pinning sequestration on the president -- are starting to argue that the cuts wouldn't necessarily be the worst thing in the world. After all, they argue, finding ways to trim waste, consolidate programs, and increase efficiency in existing government programs cuts would be better than allowing the deficit to grow.

"The federal government spends $3.5 trillion a year. This would be a little over two percent of that. Surely the government can find a way to trim a little," argued one Republican Senate aide. "Some of these scenarios they're presenting almost hurt the credibility of the administration, and the argument about the consequences of sequester."

Republicans also appear to be firm in their opposition to the prospect of further increases in tax revenue, which the president has proposed as part of his desired "balanced" approach to reducing the deficit and averting sequestration, which suggests a deal continues to be a long way off.

"The tax part is finished," said the Senate aide. "We did the tax part. Let's do the spending part. And there's balance."