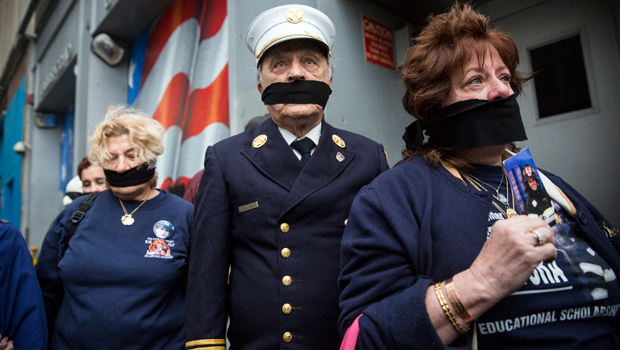 The remains were moved from the Office of the Chief Medical Examiner on Manhattan's East Side at dawn, accompanied by a police motorcade and several police and fire department vehicles with lights flashing but no sirens.

Few people gathered for the five-mile procession. Construction workers near the World Trade Center paused and took notice, and about 10 firefighters stood in the cool breeze saluting the vehicles as they arrived.

The remains will be transferred to an underground repository in the same building as the National September 11 Memorial Museum.

Like many decisions involving the site of the nation's worst terrorist attack, the disposition of the unidentified remains has been contentious.

A group of victims' family members who say the remains should be stored in an above-ground monument separate from the museum protested the procession. About a dozen wore black bands over their mouths at the site Saturday. They say they took the bands off as the remains were transferred.

Rosemary Cain, who lost her firefighter son at the trade center, was one of the protesters.

Other family members support the plans, which have been in the works for years. Lisa Vukaj, who lost her 26-year-old brother, said the new home for the remains is "a fitting place until technology advances" and new techniques are available to identify their loved ones.

Vukaj, who got emotional as the caskets containing the remains were taken inside the center, said she didn't like that some victims' relatives turned what should have been a solemn event into "a political thing."

"Just come in, pay your respects, be here, have your emotions and don't make it political," she said.

The repository will be available for family visits but will be overseen by the medical examiner. Officials hope that improvements in technology will eventually lead to the identification of the 7,930 fragmentary remains.

The death toll stemming from the attacks at the World Trade Center stands at 2,753. Of those, 1,115, or 41 percent, have not been identified.

Beyoncé ties record for most Grammys after best R&B song win
Thanks for reading CBS NEWS.
Create your free account or log in
for more features.
View CBS News In
CBS News App Open
Chrome Safari Continue
Be the first to know
Get browser notifications for breaking news, live events, and exclusive reporting.