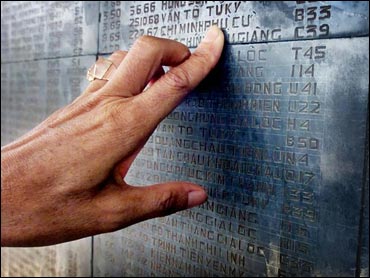 The Iraq War is deeply unpopular and has been for more than two years. Yet the men and women who served in this long battle are not unpopular. Americans worry about them, respect them and try to honor them. This might not be the case except for November 13, 1982.

That Veterans Day 25 years ago was when the Vietnam Veterans Memorial was dedicated on the Washington Mall. It was a memorial late in coming and filled with controversy. No one expected that day 25 years ago that the Wall would become the most visited memorial in the nation's capital. Some 4.5 million people come to visit each year.

Memorials at their best don't just commemorate history; they inform the present and steer into the future. The living legacy of the Vietnam Memorial belongs to today's soldiers.

Jan Scruggs was the Vietnam Vet who did more than anyone to get the Wall built. "The great lesson of the Vietnam Memorial is that it separated the war from the warrior," he told me last week.

Scruggs was an infantryman from Bowie, Maryland, who was wounded in Vietnam War. He later got a graduate degree in psychology. He's interested in things like Carl Jung and emotional dynamics of groups - the collective. In the late 1970s, Scruggs felt Vietnam's "survivors needed a societal recognition."

Many Americans didn't give the veterans and casualties of Vietnam that recognition. They were called "baby killers" and became the innocent scapegoats for a guilty government and for a society that mostly sent its poor and disadvantaged off to the jungle.

The fight to get the Wall built had an ugly side. The design by Maya Lin was especially controversial. "The Vietnam Memorial was black and the other monuments were white," Scruggs said, keeping Jung in mind.

Most of the vets groups wanted a traditional war monument: heroic, white and tall. Scruggs and his gang wanted great architecture. They got it, as any of the 40 million people who have walked by the 58,253 names chiseled in the black granite now know.

"The wall is reflective," Scruggs said. "You can see your face in it." Perhaps that is the recognition needed by a society that treated the warriors of Vietnam so poorly. In that sense, the Wall is not a memorial, but a place of forgiveness.

Scruggs and many others are now trying to raise the money to build a Vietnam Veterans Memorial Center. The idea is that since millions of people come to the Wall each year, why not add on a place to display more history, not just about Vietnam, but America's soldiers?

"The impact of the Wall today is being felt by the military veterans who are returning from Iraq," Scruggs said. "They are being treated as sympathetic figures. People want to buy them a beer."

Memorials do not make leaders wise, statesmen able and citizens alert. But great monuments can be a mirror for the people who come to look at them and can reflect some clear, new light.

E-mail questions, comments, complaints, arguments and ideas to Against the Grain. We will publish some of the interesting (and civil) ones, sometimes in edited form.
By Dick Meyer