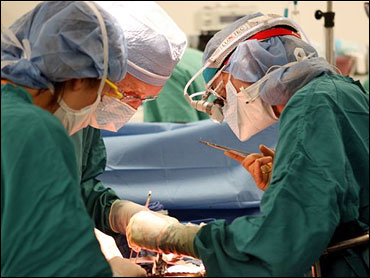 Swathed in gauze, twin sisters Kendra and Maliyah Herrin were rolled from the operating room and moved to separate beds for the first time in their lives Tuesday after 26 hours of surgery in which doctors separated the 4-year-olds and reconstructed their internal organs.

"When I was done with the operation and we were getting ready to take (Kendra) to the ICU, I got tears in my eyes, because they looked so good," pediatric surgeon Dr. Michael Matlak said.

The girls had been born in a perpetual hug, their little bodies fused at the midsection so that they were practically face-to-face. They shared a liver, a kidney, a pelvis, one set of legs and part of their intestines.

When separation surgery is performed, it's usually within the first year. CBS News correspondent Bill Whitaker reports that with Kendra and Maliyah, their doctors and parents thought it best to wait until Maliyah was old enough to receive a kidney transplant from her mother. That surgery is to be performed in about six months.

Surgeons at Primary Children's Medical Center gave each girl one leg, split their liver and intestines and reconstructed their bladders and their pelvic rings.

Kendra kept their one functioning kidney, while Maliyah will be put on dialysis and receive one of her mother's kidneys in a transplant operation in three to six months.

Parents Jake and Erin Herrin, who also have a 6-year-old daughter and twin 14-month-old boys, had an emotional reunion with their daughters.

Matlak was the first to cradle Kendra after separation, lifting her gently from the operating table to move her to another room for reconstruction surgery.

"It was a great moment," Matlak said. "In one sense, she was mine."

Matlak said he feared the gaping separation wound on the girls' bodies would be difficult to close. But tissue expanders placed in the twins weeks ago to grow their skin and muscles, combined with plastic surgery, made the job easier than expected, he said.

However, the days ahead will be tough. The girls are breathing with the assistance of ventilators, their bodies swollen from the hours of surgery and at risk for dangerous infections, Meyers said. They were swathed in gauze from chest to pelvis.

The twins are expected to remain in intensive care for about a week and recover in the hospital for at least a month before doctors can consider sending them home.

Conjoined twins occur about once in every 50,000 to 100,000 births. Only about 20 percent survive to become viable candidates for separation.

"It was hard to decide whether or not to separate them," Meyers said. "I feel good about the decision right now."