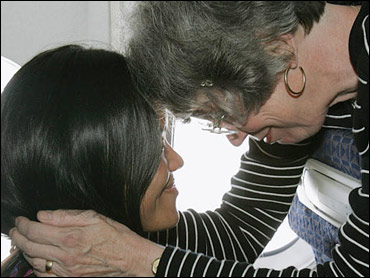 Thirty years ago, they left as children aboard a desperate flight from war-torn Vietnam.

On Wednesday, they returned as 21 grown men and women, visiting their now-peaceful homeland to commemorate the first of the "Operation Babylift" flights that eventually brought 3,000 Vietnamese children to the United States.

"It's coming home," said Canh Oxelson of Los Angeles, who was just 10 months old when he first left Vietnam.

"Though most of us don't have a lot of memories of Vietnam, for some strange reason it feels very comfortable," he added.

A total of 57 children were on board the hastily converted World Airways cargo DC-8 that took off under cover of night on April 2, 1975. Ho Chi Minh City, then called Saigon, was about to fall to North Vietnamese communist forces, and the children, many of mixed Vietnamese-American parentage, were seen as especially vulnerable to the expected privations to follow.

Mostly babies, and all of them orphaned or given up by their parents, they grew up as part of American families across the country, often in places where there was little or no Vietnamese community.

Although many have previously returned to Vietnam, they said this week's visit was especially poignant for having reunited so many of the original passengers - along with several members of the original flight crew.

"It feels different this time because I'm coming with all the other adoptees, and we've covered common ground," said Oxelson, making his second visit to Vietnam.

The adoptees arrived at Ho Chi Minh City's Airport aboard a World Airways DC-11 painted with the airline's original 1970s red and white markings. Filing past Vietnamese women holding American and Vietnamese flags, they were greeted by local officials in a VIP room dominated by a marble bust of North Vietnam's revolutionary leader, Ho Chi Minh.

"Coming back here, it's just a great opportunity to learn more about my culture," said Jared Rehberg of New York City, who composed and recorded a CD, "Waking Up American," dedicated to those involved with "Operation Babylift."

Bill Keating, a pilot on the original flight, recalled taking off without lights to foil North Vietnamese anti-aircraft fire - and without clearance from the American authorities. The airline initially faced sanctions for defying U.S. officials, but support from the American public ensured the flights continued almost until Saigon's fall on April 30.

For Keating and other former crew members, the memories are still vivid. Former flight attendant Janice Wollett still has pictures from that night, faded images of babies strapped into nylon webbing or playing on the floor of the plane with smiling airline employees.

"The world is too small not for all of us to care for each," Wollett said. "There was so much pain here."

Not all the children survived the trips. One C5-A cargo plane used in a later flight crashed, killing nearly half the 330 children and adults on board.

Those who made it became more curious about their past as they grew older, said Timothy Linh Holtan, of Wheaton, Md. Coming back to visit helps soothe those yearnings, he said.

Yet for Tanya Dilbeck Bakal of Alpharetta, Ga., the questions aren't ever answered completely.

"Each time you come, you find answers to questions you didn't even think of, or you experience some kind of emotion, or you see something that triggers something down here that all of a sudden you have no control over," said Bakal, 31. "There's still that part of you that you'll never be able to fill, that you've missed."