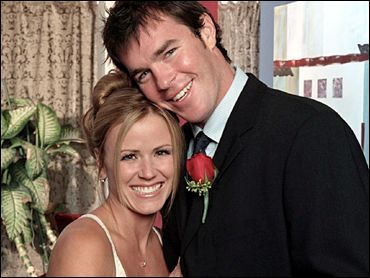 Roses are red, violets are blue, "The Bachelorette" is history, and Charlie is, too.

Proving a stuffed whale and treacly prose are the key to at least one girl's heart, television's most eligible bachelorette, Trista Rehn, fell for Ryan, the sensitive firefighter who tickled her fancy with poems.

Ryan Sutter, 27, of Vail, Colo., immediately dropped to his knees to ask the woman he'd known for six weeks to marry him. She said yes.

Stephanie Wolters said even though Rehn and Sutter are opposites, they're made for one another.

"I'm a helpless romantic and I think that love can conquer anything," she told Kaufman. "I mean, you can get a job anywhere, you know? If you're in love, go for it!"

"Not too much throws us for a loop, and I guarantee you that we're all sitting here with our mouths open," Capt. Jim Spell said. "We're thrilled that Ryan's happy."

Sutter was in New York Wednesday, but Spell said he'd had been back on the job for weeks since the finale was taped and had given no hint of the outcome.

"He worked two days ago," Spell said. "He has kept it a very close secret."

It was all the stuff of fairy tales, and ABC was certainly hoping Wednesday's last episode of "The Bachelorette" was a happy ending in the ratings, too.

The reality series has faded in appeal compared to Fox's juggernaut, "Joe Millionaire," which averaged nearly 35 million viewers Monday. But it still was ABC's most popular show last week. The network stretched the final episode of "The Bachelorette" to two hours, and it unfolded like a 500-page Hallmark card.

"The fact that I'm falling so hard for two guys at the same time is very stressful to me," said Rehn, the 29-year-old physical therapist and former Miami Heat cheerleader, setting up Wednesday's cliffhanger ending.

It was stressful for Sutter and Maher, too, who awkwardly tried to divine Rehn's true feelings between nuzzles and kisses.

One early hint it was a good night for Ryan: a quick camera shot showing her waking up clutching the stuffed whale he had bought for her earlier.

Rehn took both men home to meet the folks in St. Louis, the yellow leaves on trees a reminder that Wednesday's episode was filmed months ago. The handsome, easygoing Maher made Rehn's mother and stepmother swoon; they all but asked to watch when Maher said he occasionally clipped his chest hairs with a buzzer.

Sutter was more shy, but won points by privately asking Rehn's father if he could propose to his daughter.

Both men picked up sparkling engagement rings on Rehn's decision day, ready to spend the rest of their lives with a woman they'd courted on camera.

Tears dropped from Rehn's eyes when she informed Maher that her heart belonged to someone else. Driven away in a limousine, he said he felt like he'd been hit by a bus.

Instead, Sutter got the rose.

"This day is a day I dreamed about my entire life," she said. "I see smiles and laughter, I see babies and grandbabies, I see comfort and safety. I see me in a white dress and I see it with you."

Ryan replied that he loved Trista "with every ounce of who I am."

"In 30 years, this town never ceases to surprise the heck out me. My firefighter just proposed marriage in front of 30 million people," Spell said.

Since the series began, the Vail fire department has been deluged with phone calls, e-mails, cookies and pictures.

"These are women that are in love with Ryan, or feel deeply for Ryan — this has gotten way past us," Spell said. "We're simple firemen."

Time will tell if television's dating game will work. As Rehn moved inexorably toward her decision, ABC continually hyped Thursday's interview with the winning couple from last fall's "The Bachelor."

Their engagement is already on the rocks.