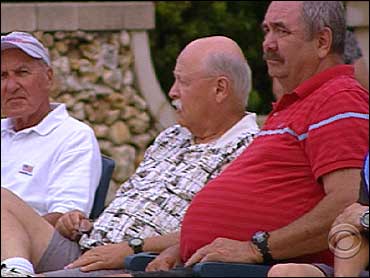 When you think of senior citizens, the clichés are obvious - retirees, golf, leisure and Florida.

But with almost 35 percent of the state's population projected to be over 50 years old in 2008, according to the AARP, Florida is a good place to find out what's important to senior voters, reports CBS News' Jeff Glor.

"Getting those voters on your side can really make the difference between winning and losing," said Susan MacManus, a political science professor at the University of South Florida. " And there is no place that probably shows that more than Florida."

In The Villages, a community north of Orlando that's home to 70,000 seniors age 55 and older, the leisure activities might make it look like residents have other things on their minds than campaign issues. But candidates pass through here regularly and for one reason - seniors vote.

"This group is the most dependable portion of the electorate," said MacManus. "They are very, very high turnout voters."

CBS News gathered a group of politically active residents of the Villages to find out which candidate this age group will turn out for.

There were Sen. John McCain supporters like Al Butler, who said that McCain "is a safer choice for this country and I think people are beginning to see that."

And there were Sen. Barack Obama backers like Roger Cooper, who thinks "we need an aspiring teacher as president and I think he will be much more appropriate in that role than John McCain."

A recent Wall Street Journal poll showed Obama has a clear advantage over McCain in the 18-34-year-old age group - 55 percent for Obama; 31 percent for McCain. But for voters 65 and older, it's McCain over Obama - 51 percent to 41 percent. And the gap is widening.

Seniors backing McCain may be aware of Obama's star quality.

"Mr. Obama has a wonderful charismatic look about him and a way of presenting a speech," said Mike Francis, a McCain supporter.

But Obama's supporters in the senior community have to counter concerns he's untested or that his patriotism, an issue that resonates here, is somehow in question.

"You don't have to wear a flag pin to be patriotic. You don't have to put your hand over your heart when the national anthem is sung," said Nancy Bell. "And he has said 'My story would never be possible if it weren't for this great country that I love.' "

McCain's backers say they may be choosing the familiar over the new, but experience is the key factor.

"[McCain] knows how to get things done," said Butler. "While his goals may not be as lofty or as aspirational as Sen. Obama's, they are practical and they are things that can really get done."

The issues important to this group are varied, with Obama supporters citing the economy, the war and energy while McCain backers talk about experience.

And both candidates know seniors, more than any other group, are following the campaign closely.

"The candidates know the history of this group being high turnout and very informed," said MacManus. "It's why candidates ignore this group at their own peril."