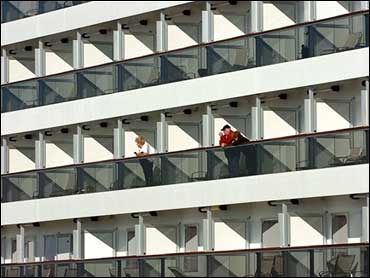 A funky army of hundreds calling for universal health care marched through the streets of Philadelphia on Saturday. They were sending a message to the Republican Party, which opens its national convention here Monday.

Their ranks were filled by respectable medical doctors in lab coats, anti-poverty activists, communists, and tattooed teenagers with lots of body piercing. The march followed a pro-gun control demonstration that took place early in the morning, on the first of several days of scheduled protests around issues ranging from criminal justice to worker rights.

There many unionized workers and supporters of Ralph Nader's presidential candidacy in the crowd.

"I think it's just downright sickening that we don't have access to health care in the United States of America!" said Cheri Honkala, a local poverty activist who is organizing several demonstrations in Philadelphia this weekend.

"I got a fishbone stuck in my neck in Gaza, and they didn't give a damn if I had health insurance or not," Honkala told the crowd. If it had happened at home, "I probably would have choked to death because I didn't have health insurance."

The march went down 6th Street, rounding Independence Hall and west on Chestnut Street past City Hall to a plaza where Ralph Nader addressed them. Nader was the only national politician there, but the specter of George W. Bush was in the air.

"We're here to deal with some serious business instead of that political corporate carnival that calls itself a convention," Nader told the crowd.

He also said: "For decades, we are the only Western country that doesn't provide universal health care for tis people."

A sign carried by a member of the Philadelphia Direct Action Group had a cutout George Bush face speaking into a cartoon bubble: "Uninsured?.. Let them drink oil!"

A cardiothoracic surgeon from a Philadelphia area hospital who said he will vote for Bush blamed the Balanced Budget Act of 1997 for squeezing health care providers.

"I don't like the way we have to treat the patients in order to survive," said Dr. Francis P. Sutter. "I'm throwing patients out of the hospital -- I'm having patients leave the hospital before they a should be. We do everything safe. But we're pushed to the limit."

Most marchers shrugged when asked the difference between the parties in terms of universal health care, and gave the edge to the Democrats, unenthusiastically.

Psychiatrist Lindley Winston, one half of a husband and wife mental health team in their 70's said, "Our son will vote for Nader. We'll vote for Gore."

Volunteer ACLU observers kept pace with the marchers, on the lookout for any infringement of demonstrators' First Amendment right.

A large but friendly police presence kept watch too, on foot, bicycles anhorseback. A half dozen officers in SWAT-style uniforms and bulletproof vests stood on the steps of the federal courthouse. Philadelphia Police Chief John Timoney even stopped by the rally on his bike, but left quickly when his presence attracted too much attention from reporters and protesters angry about a recent police beating of a suspect.