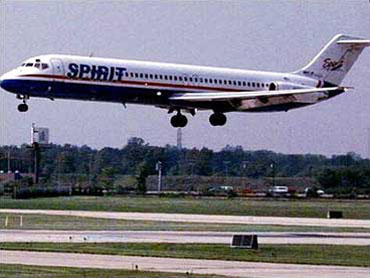 An airline's plan to charge up to $45 for passengers to store carry-on luggage in overhead bins has riled two Democratic senators enough for them to write legislation banning such a practice.

"Unlike heavy suitcases, that belong down in an aircraft's hold, carry-on luggage is where people keep items essential to their health, work and safety like laptop computers, medications, food to eat on the plane, baby formula, eye glasses and other essentials that need to be kept close at hand," Cardin said in a statement.

Spirit Airlines announced April 6 it will charge passengers $45 at the airport to store baggage in overhead bins. Customers can pay a reduced $30 fee in advance.

"I understand that at this point only one airline has announced plans to charge for carry-on item fees, but we cannot allow these flood gates to open," Cardin said in the statement.

The Cardin-Landrieu bill comes after fellow Democrat Sen. Charles Schumer of New York called the fees a "slap in the face to travelers" Sunday and said he had asked the Treasury Department to rule that carry-on bags are a necessity for travel, which would make them exempt from a separate fee outside the ticket price, the Associated Press reports.

Spirit CEO Ben Baldanza has defended the fees, saying fewer carry-on bags will help empty the plane faster and that the cost of most tickets would be reduced by $40.

Baggage fees have become big business for airlines: From $464 million in total revenues in 2007 to almost $2 billion, just in the first nine months of 2009, CBS News Correspondent Mark Strassmann reports.

To avoid charges, one in four passengers now checks zero bags, down from one in six two years ago. That's led to a 24 percent drop worldwide in lost bags but a rise in heavier carry-on bags, Strassman reports.

If the bill doesn't gain much traction in the Senate in the next few weeks, Cardin could promote the bill in the form of a question to President Obama's nominee to replace Justice John Paul Stevens on the Supreme Court. Cardin sits on the Judiciary Committee and mentioning the bill during a nationally televised confirmation hearing might attract more attention to it.

Carry-Ons to Cost $45 at Spirit Airlines