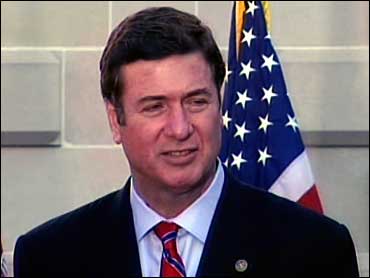 By The Politico's Carrie Budoff.

The fear gnaws at senators, embodied in a catchphrase that conveys their dread: Don't be the next George Allen.

In Republican campaign strategy sessions and conference calls, candidates and consultants are invoking Allen's name as a verb — to be "George Allen-ed" — and devising tactics to avoid a fate similar to that of the former Virginia senator, taken down by a shaky, 51-second video that volleyed around the country via YouTube.

"You have to assume there is a recording device of some kind on you at all times — that is what I am telling all of my people," said Sen. John Ensign, Nev., chairman of the National Republican Senatorial Committee, which will work with 21 incumbents up for re-election next year.

Campaigns have long operated on a need-to-show basis. But with the method (cell phones) of capturing embarrassing moments and the means (the Internet) of disseminating them so universally, early discussions about surviving the 2008 election cycle are all about control.

A list of rules, if one existed, would nix jokes, stumbling or snoozing in public. Don't berate aides, ambush an opponent at a news conference or do anything humiliating enough to tank a career.

"The idea of tracking a candidate, the opposition filming and turning it into an ad — yes, it is concerning," said Sen. Larry Craig, R-Idaho, who faces re-election next year.

Gaffes can afflict members of either party, but Republicans seem more fixated than Democrats on managing the new political world order. After all, it was one of their own — a likely (and, at the time, competitive) presidential contender — who became the highest-profile casualty.

"Some of the old bulls are saying, 'Can you believe that someone had a video camera and was taking my picture as I was walking around?'" said Sen. John Cornyn, Texas, vice chairman of the Senate Republican Conference, who is up for re-election next year. "They seemed astonished. It's a little cognitive dissonance of the scrutiny we will all undergo, and it will change the face of American politics."

When the National Republican Senatorial Committee convened a "lessons learned" seminar earlier this month on the 2006 election, campaign officials for Sen. Bob Corker of Tennessee and former Sens. Rick Santorum of Pennsylvania and Jim Talent of Missouri put the power of video at the top on the list, Ensign said.

A camera caught former Montana Sen. Conrad Burns with heavy eyelids at a Senate field hearing. Another camera recorded Democrat Harold Ford confronting Corker at one of his events. Republicans dubbed it the "Memphis Meltdown" — and pundits later called it a turning point in the race that Corker won.

But Allen's public mocking of a volunteer staff member for Democrat Jim Webb as "macaca," considered a slur to someone of Indian descent, remains the symbol of what not to do in 2008. Political analysts attributed Webb's razor-thin victory to Allen's mistake.

"You hear it every day," said Fred N. Davis III, a California media consultant who worked for Corker and has signed on with John McCain's presidential campaign and the re-election campaigns of four senators. The fear "is more than sitting in the back of their minds. It is very much in the forefront."

"We are trying to put as many resources there as possible," said Davis, adding that he just spent 20 minutes with a Senate candidate hashing out strategies to avoid being "George Allen-ed."

It means training and controlling the candidate. Instill a discipline: Remember you're always on. And make sure there is always someone with the candidate who watches everybody else.

"We will obviously do what they are doing," Craig said. "You have to hire an extra staffer. You have to raise more money. You have to track them and turn it around in their face."

Sen. Frank R. Lautenberg, D-N.J., said the fishbowl existence might cut down on his levity.

"You can't ignore the fact that every word you say is being recorded," said Lautenberg, who faces re-election next year. "It is hard to make jokes, and a large part of my routine, my view of life, carries humor with it."

Sen. Ted Stevens, R-Alaska, who has already faced ridicule for describing the Internet as a "series of tubes" — a clip that has been parsed repeatedly on the Web and Comedy Central — said he doesn't fear his own George Allen moment in the 2008 campaign.

"Not unless you start," Stevens said, chiding a reporter before scooting quickly off a Senate elevator.
By Carrie Budoff
TM & © 2007 The Politico & Politico.com, a division of Allbritton Communications Company