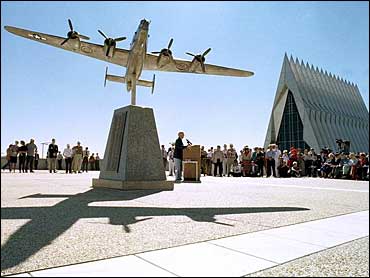 An Air Force Academy oversight board failed to press academy leaders about sexual assaults at the school and received only a filtered version of events, Sen. Wayne Allard told a congressional task force as it met Monday for the first time.

The Board of Visitors - congressmen and other prominent appointees who essentially act as trustees of the academy - was "too much of a rah-rah club," said Allard, R-Colo., saying the group didn't demand information, as it should have, about the academy's handling of sexual assaults.

"As a member of the board, I can honestly say that we have not done our job," Allard said. "We have allowed the academy's leadership to convince us that everything was OK when clearly everything was not OK."

Air Force Secretary James Roche said he had assumed the board was acting as a company's board of directors and was representing taxpayers. He was surprised to learn they were not. Instead, he said, academy officials treated the panel as "a board you told good news to."

Allard said the board should meet at least quarterly, include more civilians and have unfettered access to cadets.

The Board of Visitors' role will be among issues examined by the panel, said chairwoman Tillie Fowler, a former Republican congresswoman from Florida.

Fowler's panel was created by Congress to examine the academy's policies and procedures to deal with rapes and sexual assaults after allegations that academy leaders were dismissive of cadets' claims that they were attacked.

"We are not here to tear down an institution, only to help restore trust and strengthen it for a new generation of our nation's leaders," Fowler said. "The priority of this panel is to ensure today's young women cadets of the Air Force Academy have a safe and secure learning environment."

Fowler said she received an e-mail from a member of the Air Force Academy's new class of cadets, due to arrive at the academy this week, who said she did not feel safe at the school and had opted not to attend.

Allard also urged the panel to focus on whether leaders at the academy should be held accountable for the climate that permitted assaults to take place.

"It is important for the cadets who are striving to become future leaders to understand that there are consequences for those who fail to uphold the principles that make our military the best in the world," he said.

In a statement to the committee, Rep. Joel Hefley, R-Colo., cautioned against a "fire-and-forget" approach. "The dismissal or demotion of academy leaders will not, by themselves, solve the underlying problem," he said.

Roche said he and Air Force Chief of Staff Gen. John Jumper are reviewing whether anyone hindered the reporting of an assault or if a commander failed to act on available information.

Fowler's panel also reviewed findings of an Air Force inquiry released last week, which found that dwindling attention was paid to the issue of sexual assault in recent years and identified several policies that hampered the prevention and prosecution of sex crimes at the academy.

The Air Force report recommended reassessing several academy policies, including a cadet command structure that gives senior cadets authority over freshman cadets. That leaves the new cadets vulnerable to those who would abuse their authority, the report said.

Fowler said her panel tentatively plans to visit the campus near Colorado Springs, Colo., on July 10-11 to meet victims, accused attackers and others and to hold a public hearing. Her panel's report is due Sept. 22.

Besides Fowler's panel and the Air Force working group, the Department of Defense and Air Force inspectors general are conducting separate investigations.