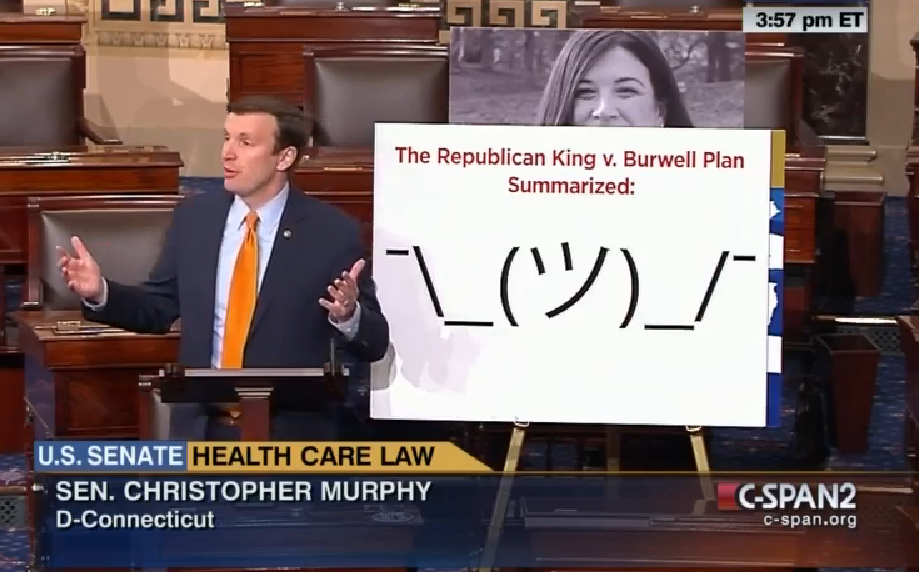 With a little help from an Internet meme, Connecticut Sen. Chris Murphy criticized the GOP on Obamacare Thursday, saying Republicans are offering nothing more than a shrug of their shoulders to the millions of Americans who could lose Obamacare subsidies if the Supreme Court rules against the Obama administration in a closely-watched case this summer.

During a floor speech, Murphy trotted out an enormous poster bearing the "shruggie," a popular internet meme that shows a man shrugging his shoulders: ¯\_(ツ)_/¯

"This is a pretty good summary of what the Republicans' plan is to respond to King v. Burwell," Murphy explained, citing the name of the case before the Supreme Court.

The case could decide whether Americans in the 36 states whose Obamacare exchanges are operated by the federal government are eligible for the same tax credits enjoyed by Americans in states that set up their own exchanges.

The text of Obamacare states that subsidies may be issued to eligible consumers who buy insurance through an exchange "established by the state." The law's proponents have argued that the law was not written to to deny anyone a subsidy just because the federal government -- rather than the state government -- set up the exchange in their state. Attorneys for the administration have argued that the federal government was "standing in the shoes" of states when it set up exchanges in states that were unable or unwilling to do so.

Opponents of the law, though, say the text is clear -- consumers in the federal exchange aren't eligible for subsidies. If those consumers are stripped of their tax credits to help purchase insurance, Murphy repeated Thursday, "The Republicans plan is essentially a shrug of the shoulders."