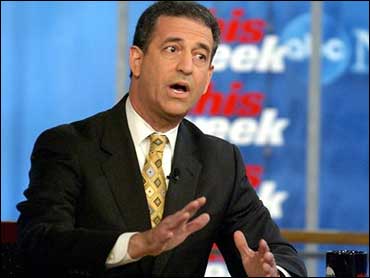 "The president has broken the law and, in some way, he must be held accountable," Sen. Russ Feingold, a Wisconsin Democrat, told The Associated Press in an interview.

A censure resolution, which simply would scold the president, has been used just once in U.S. history, against Andrew Jackson in 1834.

Senate Majority Leader Bill Frist, a Republican of Tennessee, called the proposal "a crazy political move" that would weaken the U.S. during wartime.

The five-page resolution to be introduced on Monday contends that Bush violated the law when, on his own, he set up the eavesdropping program within the National Security Agency in the months following the attacks of Sept. 11, 2001.

Bush claims that his authority as commander in chief as well as a September 2001 congressional authorization to use force in the fight against terrorism gave him the power to authorize the surveillance.

The White House had no immediate response on Sunday.

The resolution says the president "repeatedly misled the public" before the disclosure of the NSA program last December when he indicated the administration was relying on court orders to wiretap terror suspects inside the U.S.

"Congress has to reassert our system of government, and the cleanest and the most efficient way to do that is to censure the president," Feingold said. "And, hopefully, he will acknowledge that he did something wrong."

Feingold, considered a presidential contender for 2008, said he had not discussed censure with other senators, but, based on criticism leveled at Bush by both Democrats and Republicans, the resolution makes sense.

The president's action were "in the strike zone" in terms of being an impeachable offense, Feingold said. The senator questioned whether impeaching Bush and removing him from office would be good for the country.

In the House, Rep. John Conyers of Michigan, the top Democrat on the House Judiciary Committee, is pushing legislation that would call on the Republican-controlled Congress to determine whether there are grounds for impeachment.

The program granted intelligence officers the power to monitor, without court approval, the international calls and e-mails of U.S. residents, when those officers suspect terrorism may be involved.

Frist, appearing on ABC's television show "This Week," said that he hoped al Qaeda and other enemies of the U.S. were not listening to the infighting.

"The signal that it sends, that there is in any way a lack of support for our commander in chief who is leading us with a bold vision in a way that is making our homeland safer, is wrong," Frist said.

Sen. John Warner, a Virginia Republican, said on CNN's "Late Edition" that Feingold's announcement on a Sunday talk show was "political grandstanding. And it tends to weaken our president."

A longtime critic of the administration, Feingold was the first senator to urge a withdrawal timetable for U.S. troops in Iraq and was the only senator to vote in 2001 against the USA Patriot Act, the post-Sept. 11 law that expanded the government's surveillance and prosecutorial powers. He also voted against the 2002 resolution authorizing Bush to use force in Iraq.

Jackson was censured by the Senate in 1834 after he removed the nation's money from a private bank in defiance of the Whig Party, which controlled the Senate.

On Feb. 12, 1999, the Senate failed to gain enough votes to bring a censure resolution against former President Bill Clinton. The Senate had just acquitted Clinton after the House impeached him in December 1998, accusing him of committing perjury and obstructing justice in the Monica Lewinsky affair.