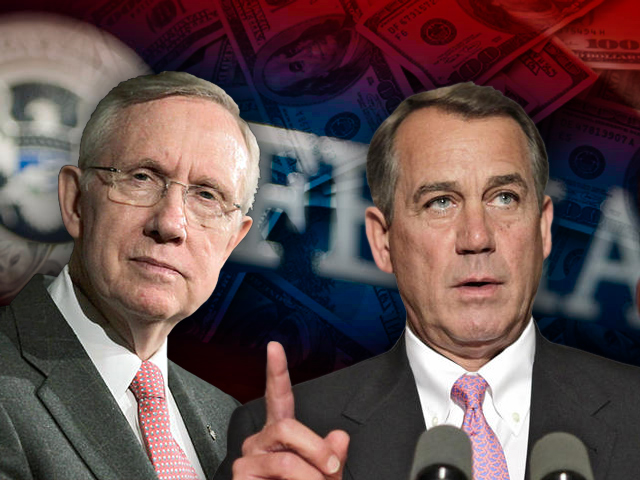 Partisan squabbling over a fraction of the federal budget has tied up a short-term spending bill, but the Senate returns to work tonight to vote on a bill in the hopes of avoiding a government shutdown this week.

The House and Senate last week intended to pass a bill to keep the government funded through November 18 and provide emergency funding for the Federal Emergency Management Agency (FEMA). But Democrats and Republicans disagreed over whether it's necessary to cut funding for other programs to pay for the FEMA expenses, and they failed to pass the bill. Now, if Congress doesn't pass the spending bill by Sept. 30, the government would be forced to shut down.

The Senate on Friday rejected the House version of the bill, which would have allocated about $1 trillion in government funding, including about $3.7 billion for FEMA disaster aid. The Democratic-led Senate voted against the House bill because it includes $1.6 billion in Republican-proposed spending cuts targeting the Department of Energy's Advanced technology Vehicle Manufacturing Program. The program gives loans to car companies to pay for things such as factory upgrades and the development of new, green, fuel efficient technology, and Democrats say the cuts would cost up to 10,000 jobs.

With little time left to act, Senate Majority Leader Harry Reid tonight will hold a vote on a bill that mirrors the House version, but without the spending cuts. If it passes, the House would have to pass that version as well. If it fails, the Senate could be compelled to accept the House version or, more likely, the two sides would have to negotiate a compromise in the next few days.

The funding in question represents just .04 percent of the federal budget, but the fight represents the larger battle over deficits and government spending.

Meanwhile, FEMA is running short of cash to pay for relief efforts to help the victims of Hurricane Irene, Tropical Storm Lee, and several other costly natural disasters across the country. Victims of the disasters say Congress is letting people suffer while it continues its partisan bickering, the New York Times reports. The disaster relief fund has just $114 million left in it, the Associated Press reported Monday, which should be enough money to last until this Thursday -- two days longer than earlier predicted.

Over the weekend, members of Congress gave little indication that they were ready to compromise.

"The Senate is saying... why should we, in effect, rebuild schools in Iraq on the credit card but expect that rebuilding schools in Joplin, Missouri, at this moment in time have to be paid for in a way that has never been in any of the previous disaster assistance that we've put out before?" Sen. Mark R. Warner, D-Va., said on CNN's "State of the Union."

The office of House Majority Leader Eric Cantor, meanwhile, pointed out Monday morning that Democrats have in the past diverted renewable energy funding for other programs and called Senate Democrats hypocritical for opposing to do so in this instance.