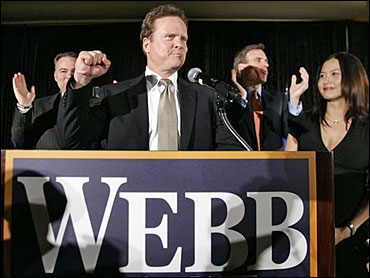 Democrats won control of the Senate from Republicans with a narrow victory in Virginia, CBS News estimates, giving the party complete control of Congress for the first time since 1994.

Jim Webb's narrow win over incumbent Senator George Allen gave Democrats their 51st seat in the 100-seat Senate, an astonishing turnabout at the hands of voters unhappy with Republican scandal and unabated violence in Iraq. Allen was the sixth Republican incumbent senator defeated in Tuesday's elections.

The Senate had teetered at 50 Democrats, 49 Republicans for most of Wednesday, with Virginia hanging in the balance. Webb's victory ended Republican hopes of eking out a 50-50 split, with Vice President Dick Cheney wielding tie-breaking authority.

Seizing on voter discontent with President Bush and the war in Iraq, Democrats mounted challenges for two remaining Republican-held seats in Virginia and Montana — and were ahead in both. But in Virginia, Democratic challenger James Webb's lead over Republican incumbent George Allen was razor thin and a recount was likely.

In Missouri, Democrat Claire McCaskill defeated Republican Senator Jim Talent, who had tried to distance himself from president bush and his party throughout the campaign. But in the end, reports CBS News correspondent Sharyn Alfonsi, he wasn't far enough away.

"The head wind was just very, very strong this year," Talent said in his concession speech.

Exit polls show that the votes cast in Missouri were just as much against the president as they were for McCaskill.

Voting machine problems in Montana's most populous county, plus long lines and late tallies, pushed the outcome of the U.S. Senate race there into the daylight hours, reports CBS News correspondent Stephan Kaufman, before the seat was ultimately declared for Democrat John Tester.

Sen. Joseph Lieberman, the Democrats' vice presidential candidate in 2000 but running as an independent after losing the Democratic primary, kept his seat from Connecticut, despite his earlier support for the war in Iraq.

"This puts Joe Lieberman, without question, in the catbird seat," says . If you have a closely divided Senate ... everybody is going to be wanting Joe Lieberman's vote.

"And let's not forget, Democrats turned their backs on Joe Lieberman, after he decided to become an Independent, so he really doesn't owe them," Schieffer adds.

"We will not solve those problems and meet those challenges and seize the opportunities of the future unless we stop the partisan nonsense and work together," Lieberman said in his victory speech.

"How do you make nice with the senators who basically abandoned you when you needed them?" CBS News correspondent Byron Pitts asked him.

"We're all grownups," Lieberman replied. "And the Senate ultimately is 100 people going to work in the same place every day and your ability to get things done depends on how well you get along with the workers. So it will be fine."

But Republican Bob Corker, a former mayor of Chattanooga, defeated Democratic Rep. Harold Ford for the seat held by retiring Senate Majority Leader Bill Frist. Ford had sought to become the first black southerner elected to the Senate in more than a century.

Americans "have come to the conclusion, as we did some time ago, that a one-party town simply doesn't work," Senate Minority Leader Harry Reid, D-Nev., told party workers early Wednesday.

Reid said a strong Democratic turnout in both Senate and House races shows "we must change course in Iraq."

Webb, a former Navy secretary under President Reagan, claimed victory early Wednesday but Allen, behind by fewer than 8,000 votes, had urged his supporters to watch the remaining returns carefully.

CBS News Early Show co-anchor René Syler asked Montana's Tester if people were voting against President Bush rather than for him.

"I think there's probably both going on, but the truth is it's proof positive that Montanans are ready for a change," Tester replied.

In New Jersey, Sen. Bob Menendez held off a strong challenge from Republican Tom Kean Jr., son of a former governor, to keep the seat in Democratic hands. Menendez, appointed to the seat in January after Jon Corzine gave it up to become governor, had been viewed as the most vulnerable of 17 Senate Democratic incumbents.

Lieberman will be one of two independents in the new Senate. Rep. Bernie Sanders, an eight-term congressman who calls himself a socialist, won the seat of retiring Sen. Jim Jeffords, also an independent. Both Lieberman and Sanders have said they will align themselves with Democrats.

Harris came to national attention in 2000 when, as Florida secretary of state, she certified Bush as the Florida winner in his nearly deadlocked presidential race with Democrat Al Gore. However, she fell out of favor with Florida Republicans, and was even urged by Florida Gov. Jeb Bush, the president's brother, not to run.

Democrats needed a net gain of six seats to take control of the Senate, which, except for a 19-month period in 2001 and 2002, has been run by Republicans since 1995.

Exit polls showed that almost six in ten voters disapproved of the war in Iraq, and an equal percentage said they disapproved of how President Bush was handling his job.

Among incumbents who coasted to re-election were liberal Democratic lion Edward M. Kennedy of Massachusetts West Virginia Sen. Robert C. Byrd, who has spent more than half of his 88 years in the Senate.

In Wyoming, Republican Craig Thomas, though hospitalized with pneumonia, won re-election to a third term. And Republican Sen. John Ensign in Nevada turned back a challenge from Democrat Jack Carter, son of former President Jimmy Carter.