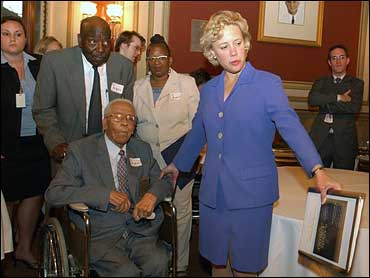 The Senate acknowledged on Monday its failure to stand against the lynching of thousands of black people in the United States, a practice that continued well into the 20th century.

"It's important that we are honest with ourselves and that we tell the truth about what happened," Sen. Mary Landrieu of Louisiana said before the voice vote that approved a Senate apology for its blocking of anti-lynching legislation when mob violence against blacks was commonplace. At least 80 of the 100 senators signed on as co-sponsors of the apology.

Nearly 200 descendants of lynching victims, and a 91-year-old man thought to be the only living survivor of an attempted lynching, listened from the visitors' gallery to speeches on what Sen. George Allen, R-Va., described as "the failure of the Senate to take action when action was most needed."

"I came here to bear witness on behalf of my cousin Jimmy," said Janet Langhart Cohen, wife of former Defense Secretary William Cohen and a member of the group that has pushed for the apology.

Her third cousin, 17-year-old Jimmy Gillenwaters, was killed by a lynch mob near Bowling Green, Kentucky, in 1912.

During that time, nearly 200 anti-lynching bills were introduced in Congress, and three passed the House. Seven presidents between 1890 and 1952 petitioned Congress to pass a federal law.

But the Senate, with Southern conservatives wielding their filibuster powers, refused to act. With the enactment of civil rights laws in the 1960s and changes in national attitudes, the issue faded away.

Lynching is variously defined as a violent act, usually racial in nature, that denies a person due process of law and is carried out with the complicity of the local society.

The sponsors of the resolution, Sens. Mary Landrieu, D-La., and George Allen, R-Va., said they were motivated in part by a recent book, "Without Sanctuary, Lynching Photography in America," in which author James Allen collected lynch pictures, mostly taken by those participating in the killings.

"More than a half-century ago, mere feet from where we sit ... the Senate failed you and your ancestors and our nation," Landrieu told descendants at a lunch in the Capitol building.

Among those present was James Cameron, who as a shoeshine boy in Marion, Ind., in 1930 was dragged from a cell and had a rope placed around his neck. Two of his friends, accused of the murder of a white man and the rape of a white woman, were hanged. Cameron, then 16, was spared when a man in the crowd proclaimed his innocence.

"I was saved by a miracle," Cameron said at a news conference. "They were going to lynch me between my two buddies," he said. Thousands of people were "hollering for my blood, when a voice said, `Take this boy back."'

The nonbinding resolution apologizes to the victims for the Senate's failure to act and "expresses the deepest sympathies and most solemn regrets of the Senate to the descendants of victims of lynching, the ancestors of whom were deprived of life, human dignity and the constitutional protections accorded all citizens of the United States."

White House press secretary Scott McClellan said President Bush talked about slavery and the travails of American democracy in a meeting Monday with five African leaders. The Senate, McClellan said, "has taken a step that they feel they need to take, given their own past inaction on what were great injustices."

Secretary of State Condoleezza Rice, who witnessed racial tensions as a child in Alabama, called the apology "a remarkable and wonderful thing" during an interview with MSNBC television's "Hardball."

Acknowledging the mistakes of the past "is an immensely important first step," said Emma Coleman Jordan, professor at the Georgetown Law Center and an expert on the subject. Other steps, she said, could include establishing a national research center and showing atonement by setting up trust funds for the descendants of victims.

Congress in the past has apologized to Japanese-Americans and other persecuted groups, but the issue of reparations has complicated efforts to apologize to blacks for slavery. Jordan said a trust fund for lynching victims descendants would target a far smaller group.