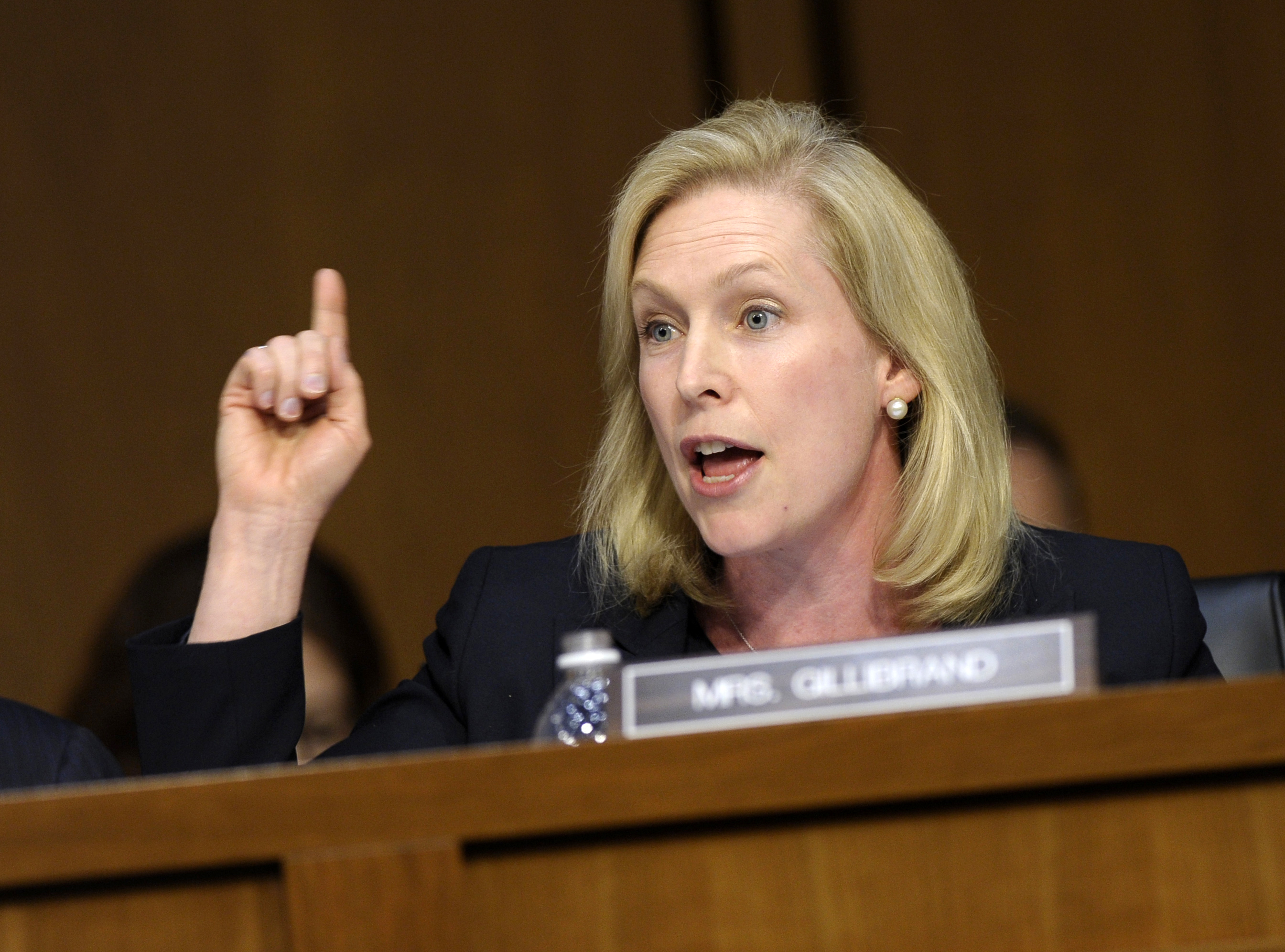 A female Democratic senator has secured public support from nearly half the Senate, but not enough votes, for her proposal to give victims of rape and sexual assault in the military an independent route outside the chain of command for prosecuting attackers.

Sen. Kirsten Gillibrand's solution for a problem the military calls an epidemic appears to have stalled in the face of united opposition from the Pentagon's top echelon and its allies in Congress, including two female senators who are former prosecutors.

Nevertheless, asked Sunday on ABC's "This Week" whether she believes she can amass the 60 votes needed to push her solution forward, Gillibrand sounded optimistic. "I think we'll get them," she said.

Opponents of the proposal by Gillibrand, a New York Democrat, insist that commanders, not an outside military lawyer, must be accountable for meting out justice.

Even so, major changes are coming for a decades-old military system just a few months after several high-profile cases infuriated Republicans and Democrats alike in a rapid chain of events by Washington standards.

"Sexual assault in the military is not new, but it has been allowed to fester," Gillibrand said in a recent Senate speech.

The Senate this week is set to consider an annual defense policy bill that would strip commanders of their ability to overturn jury convictions, require dishonorable discharge or dismissal for any individual convicted of sexual assault and establish a civilian review when a decision is made not to prosecute a case.

The bill would provide a special counsel for victims and eliminate the statute of limitations.

Those changes in military law are backed by members of the Senate Armed Services Committee. But overshadowing the revisions is the testy, intense fight over Gillibrand's proposal to strip commanders of their authority to prosecute cases of sexual assault. She wants to hand responsibility to seasoned military lawyers outside the chain of command.

Despite the competing plans and the opposition from much of the military brass, Gillibrand argued on ABC that "having the bright line of elevating all serious crimes out of the chain of command" will ensure the protection of both victims' rights and defendants' rights.

"What we have is a system where the command climate is so broken that if you are raped, you are likely going to be retaliated against for reporting that rape," she said. "The military has said for 25 years, since Dick Cheney was secretary of defense, that there is zero tolerance for sexual assult in the military, and last year alone we had 3000 cases of sexual assault."

She noted that, of those 3,000 incidents, 70 percent were violent rapes, and 62 percent of victims reported retaliation.

Her solution has divided the Senate, splitting Republicans and Democrats, men and women, even former attorneys general, into unusual coalitions. The lobbying has been fierce, with dueling data, testimonials and news conferences with victims. Opponents invited Marine Corps Brig. Gen. Loretta Reynolds to the closed-door Republican caucus last week.

Among Gillibrand's 47 announced supporters are conservative Republican Sens. Ted Cruz of Texas and Rand Paul of Kentucky, along with 16 of the Senate's 20 women.

Standing against the plan is the chairman of the Senate Armed Services Committee, Democratic Sen. Carl Levin of Michigan; the panel's military veterans Republican Sen. John McCain of Arizona and Democratic Sen. Jack Reed of Rhode Island, and three of the committee's women - Sens. Claire McCaskill, a Missouri Democrat, and Kelly Ayotte, a New Hampshire Republican, both former prosecutors, and Sen. Deb Fischer, a Nebraska Republican.

Gillibrand says she privately has received backing from more than 50 senators, but support remains short of the 60 votes that likely will be needed to overcome procedural hurdles for a vote on her amendment to the defense bill. To secure more votes, she said last week she was considering scaling back her plan to focus solely on sexual assault and rape instead of all serious crimes. That prompted complaints from her original backers that it would create "pink courts," and Gillibrand said on ABC Sunday she was reverting to her initial bill.

Either way, it hasn't diminished the opposition.

"There (are) now enough members of the Senate that begin to grasp that letting commanders walk away from this is a big mistake; holding their feet to the fire is what we need to be doing," said McCaskill. She said in an interview that, unlike Gillibrand, she wasn't changing "the policy to get votes."

McCaskill said the Pentagon already has moved unilaterally, reflected in the recent word from the Defense Department that reports of sexual assaults in the military increased by an unprecedented 46 percent during the last budget year. There were 3,553 sexual assault complaints from October 2012 through June, compared with 2,434 reports during the same period the previous year.

Defense Department officials cast the sharp increase as a sign that people are more confident about coming forward now that improvements are being made in handling assaults.

That was the Pentagon's estimate of the number of military members who may have been sexually assaulted last year, based on an anonymous survey of military personnel. Thousands of victims were unwilling to come forward despite new oversight and assistance programs aimed at curbing the crimes, according to the Pentagon report earlier this year.

"They didn't trust the chain of command. They didn't think anything would be done in their cases," Gillibrand said in an interview. "The second reason they didn't report was because they feared or had witnessed retaliation. ... The command climate failed those victims."

President Obama has called for an overhaul of the military's approach to accusations of sexual assault, but he has not publicly signaled his support for either Gillibrand's or McCaskill's proposal. Asked on ABC whether the president supports her measure, Gillibrand said, "I am so hopeful that he will, because this is an opportunity for him to show extraordinary leadership on this issue."

Pushing back against Gillibrand's proposal, Gen. Ray Odierno, chief of staff of the Army, said last week that adopting her plan would be a "big mistake" and that it would cost an estimated $113 million a year, including salaries for about 600 attorneys and support staff.

That financial assessment doesn't take into account the expense of training members of the military, medical and mental health benefits for victims, loss of productivity and possible separation from service for a Pentagon with a fiscal year budget of more than $500 billion.

"It would seem absurd for the military to say we can't possibly prevent sexual assault, rape, because we don't have lawyers to try the cases," Gillibrand said.

Bolstering their case, McCaskill, Ayotte and Fisher compiled additional changes that the Senate is expected to approve. They include barring defendants from using the good military character defense, allowing sexual assault victims to challenge a discharge or separation from the service, and extending the new protections to the military service academies.

"The reason this issue is so hard is because on one side is a very simple narrative, this is victim versus commanders and you should be for the victims," McCaskill said.

"On the other side, it's much more complex, and I'm guided by practical experience handling these cases and a pretty intimate knowledge of the Uniform Code of Military Justice and how it actually works ... and making sure we have a system that's constitutional, that works and that holds commanders accountable."

Republicans vow to investigate DOJ over FBI's search of Trump's Mar-a-Lago
Thanks for reading CBS NEWS.
Create your free account or log in
for more features.
View CBS News In
CBS News App Open
Chrome Safari Continue
Be the first to know
Get browser notifications for breaking news, live events, and exclusive reporting.