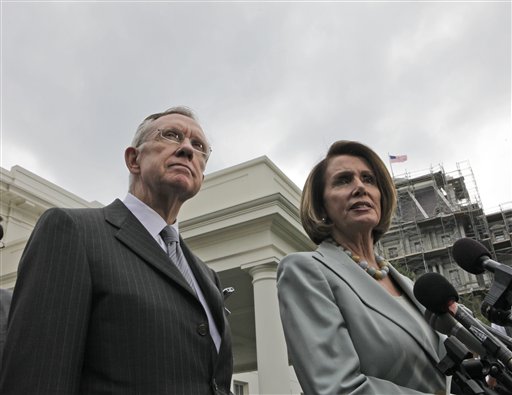 As President Barack Obama weighs major shifts in strategy in the deteriorating mission in Afghanistan, the Senate on Tuesday passed a bill bringing the total U.S. tab for that war to about $300 billion.

The $626 billion measure, passed 93-7, also would ban outright any transfer of accused enemy combatants from the Guantanamo Bay, Cuba, detention facility into the United States. Current law permits transfer of detainees to face trial or go to prison.

The underlying bill combines $128 billion for overseas military operations in Iraq and Afghanistan with $498 billion for the rest of the Defense Department's budget. An analysis by congressional researchers puts the tally for Afghanistan at about $300 billion and for Iraq at more than $700 billion since Sept. 11, 2001 _ totaling more than $1 trillion.

This winter, Obama approved 21,000 more troops to Afghanistan, which would bring the total number of U.S. forces there to 68,000 by the end of the year. The Pentagon bill approved Tuesday funds that deployment.

The bill must now be reconciled with a measure that passed the House this summer and will then be presented to Obama for his signature.

Besides Guantanamo, the most controversial issues to be resolved in House-Senate talks may involve efforts by House lawmakers to skirt a promise by Obama to veto the legislation for funding over-budget replacement helicopters for the presidential fleet. Obama has issued a weaker threat to veto efforts to keep funding a program to develop a second engine for the F-35 Joint Strike Fighter, the Air Force's major new weapons system.

On Afghanistan, Obama is weighing a request from Gen. Stanley McChrystal for as many as 40,000 additional troops. The request is being met with skepticism from many lawmakers in Obama's party and would eventually need separate funding in a future war appropriations bill.

The measure would bring to more than $1 trillion approved by Congress for the wars in Iraq and Afghanistan, according to the latest analysis by the Congressional Research Service.

And there's also ample skepticism in Congress that Obama's Iraq and Afghanistan funding request will be sufficient to last the entire 2010 budget year, which began Oct. 1. A key lawmaker, Rep. John Murtha, D-Pa., predicts that additional money will be needed next spring.

The measure does, however, give Obama and Defense Secretary Robert Gates a partial victory in their drive to kill off weapons systems that are behind schedule and over budget.

The Senate bill, for instance, follows Obama's push to kill the F-22 air-to-air combat fighter and the VH-71 replacement presidential helicopter. And it does not contain money for the second engine for the F-35 fighter, which would be built by General Electric Co. and Rolls-Royce in Ohio, Indiana and elsewhere. The main F-35 engine is built in Connecticut by Pratt & Whitney.

The House bill contains $560 million for the alternative engine. The White House issued a squishy veto threat, saying Obama would kill the bill if it would "seriously disrupt the F-35 program." It's widely expected that the final House-Senate measure will include funds for the second engine.

Obama and Gates have staked their prestige on killing several over-budget weapons systems, especially the F-22, which has its origins in the Cold War era and is poorly suited for anti-insurgent battles in Iraq and Afghanistan.

But in twin victories for the Boeing Co., the Senate measure includes $2.5 billion to fund 10 C-17 cargo planes assembled in Long Beach, Calif., which were not requested, and $512 million for nine more F-18 Navy fighters than Obama requested. They would be assembled in St. Louis.

A White House position paper on the bill says the administration "strongly objects" to the decision for additional C-17s, but that fell far short of the veto threats that have been the key to killing the F-22 program and the much-critcized presidential helicopter.

The Senate's strict language on Guantanamo meant that the chamber avoided a difficult floor fight. The companion House bill would permit transfer of Guantanamo prisoners for trial or imprisonment after a two-month delay and an assessment of the risks.

But just last week, the White House was on the losing end of a lopsided vote to ban all transfers of Guantanamo detainees to the U.S., and it looks increasingly unlikely that the administration will be able to close the Guantanamo Bay prison by January as Obama has promised.

The measure also contains $2.7 billion worth of pet projects sought by senators, commonly known as "earmarks," including funding for-profit companies to develop new technologies. The Senate by voice vote rejected a bid by McCain to require earmarked for-profit companies to be subject to competitive bidding, in keeping with reforms instituted by the House.