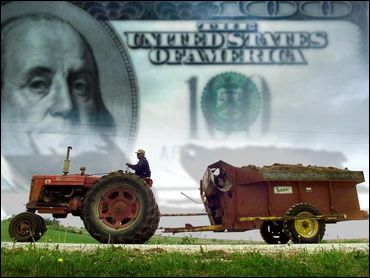 The Senate passed an election-year farm bill Wednesday that boosts subsidies for grain and cotton growers and doubles spending on conservation programs.

Unlike a House-passed bill, the Senate legislation would impose strict new limits on the payments that any one farm could receive. Some subsidies are now essentially unlimited.

The Democratic-crafted Senate bill, which passed 58-40, also offers new subsidies to a variety of commodities, including milk, honey, wool and lentils.

House and Senate negotiators will work out the final version of the bill in coming weeks, with input from the White House. Bush administration officials have complained that the Senate bill is too costly and says it would encourage overproduction of subsidized crops, but they also have criticized the House measure.

Both the House and Senate versions represent dramatic departures from the Republican-authored 1996 farm law, which was designed to wean farmers from government subsidies.

The Senate legislation, which renews farm programs through 2006, authorizes $45 billion in new spending over the next five years, a 27 percent increase over current programs. The House authorized a $38 billion increase over the same period.

There are numerous thorny issues for the House and Senate negotiators to resolve, including the spending levels and payment limits.

A congressional budget agreement last year set aside $73.5 billion in new farm spending over the next decade, a level the Bush administration supports. Administration officials, however, complain that the Senate bill spends too much of that — $45 billion before 2007. Congress would then be forced to slash programs or increase spending.

On Tuesday, the Senate voted to include in the bill a new program that, in order to protect endangered fish, would use subsidies to encourage farmers to reduce their use of irrigation water.

The $1 billion program was restricted to seven states — Maine, New Hampshire, Nevada, New Mexico, California, Oregon and Washington — because of the opposition.

Opponents of the program fear federal involvement in disputes over water usage and endangered species, but the Senate approved it on a 55-45 vote.

Sen. Harry Reid, D-Nev., predicted that "all the other states will be fighting to get in" the water conservation program once they see the benefits.

The Senate on Tuesday also refused to back off a ban on meatpackers owning their own supplies of livestock, turning aside warnings by the companies that the prohibition would cause upheaval in the beef and pork industries.

The Senate narrowly approved the ban in December as an amendment to legislation extending federal farm programs. Packers, who would have up to 18 months to sell off any livestock that they own, said the restrictions make it harder for them to procure adequate supplies of top-quality meat.