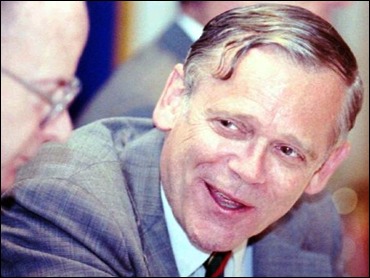 The Senate Banking Committee on Tuesday approved the nomination of Wall Street investment banker William H. Donaldson, who has promised to work to rebuild investor confidence, to head the Securities and Exchange Commission.

The panel's voice vote action cleared the way for approval by the full Senate, possibly this week. Donaldson, 71, a former chairman of the New York Stock Exchange with ties to the Bush family, will replace lame-duck SEC Chairman Harvey Pitt. Pitt, the Bush administration's first SEC chief, resigned under fire in early November after a series of political missteps amid last year's wave of corporate scandals. Senators of both parties have been impatient to see him replaced.

Pitt resigned in large part over his selection of former FBI Director William Webster to head the accounting board. Webster also quit during the uproar late last year.

The SEC chairman and four fellow commissioners — still three Republicans and two Democrats after Donaldson assumes the job — appoint the accounting board boss.

At his confirmation hearing last week, Donaldson told the committee that if confirmed he would aggressively enforce corporate anti-fraud rules and said his highest priority is selecting a new chairman of the board overseeing the accounting industry.

But he faced scrutiny from Democrats on the Banking Committee who examined his leadership of the NYSE in the early 1990s, when floor brokers made millions of dollars in illegal trades. The trading fraud scandal later brought the first-ever criminal prosecutions of floor brokers at the exchange.

Donaldson and other senior NYSE officials are said to have quietly approved of letting brokers who worked on the exchange floor trade and share in profits with private customers.

A federal judge in 1999 accused the stock exchange of "downright anorexic" enforcement of a prohibition against floor brokers trading accounts in which they hold an interest. The judge admonished the NYSE for failing to enforce securities laws and its own rules meant to prevent brokers from getting an unfair advantage over other investors.