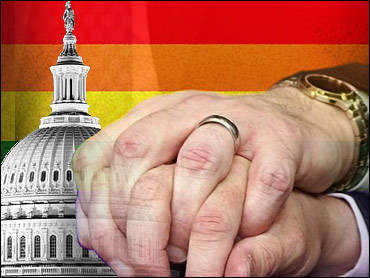 When presidential hopeful John Kerry chose Senator John Edwards to be his running mate, Democrats predicted that the presence of the North Carolina senator on the ticket would increase its appeal in the Republican South.

In the coming days, though, Senate Republicans are working to ensure that Kerry and Edwards cast votes that could alienate voters in the Bible Belt, Florida Panhandle and other Southern bastions. The legislation: a constitutional amendment to ban same sex marriages.

No other social issue carves a wider divide between the North and the South in the United States than same sex marriage. Not abortion. Not gun control. In the South, where as many as two-thirds oppose same-sex marriages, voters say they are far less willing to back a candidate that feels differently.

The Democratic ticket's Southern bounce could hit a speed bump.

Same sex marriage, says Merle Black, a professor at Emory University in Atlanta, "goes to the heart of (Southern voters') cultural beliefs. They really believe marriage should be between a man and a woman."

While Kerry and Edwards oppose same sex marriage, they argue that it is an issue that should be left to the states to decide. Both senators say they would vote no on the proposed constitutional amendment.

"It will give the Republicans ammunition against Edwards across the South. And they would use that in their advertising closer to the election," Black said.

The Senate vote would come just days before the Democratic National Convention in Boston July 26-29 when Kerry, a four-term Massachusetts senator, and Edwards are nominated by their party. Supporters of the same sex marriage amendment acknowledge it is doomed to fail, and the Kerry campaign sees the timing of the vote as pure politics.

In the 2000 election, Mr. Bush did well across most of the South, but the Kerry campaign hopes that Edwards will help them secure North Carolina and make inroads elsewhere.

The latest Associated Press-Ipsos poll found that Kerry slightly strengthened his support in the South with the addition of Edwards.

But polling done in February and March by the Pew Research Center suggests that Southerners, more than folks in any other region, will consider the same sex marriage issue in the voting booth.

Kerry and Edwards, who have missed many Senate votes while campaigning the last year, could be absent for the same sex marriage amendment, but that would not go over well with gay activists, who raised $1.8 million for the campaign in a single night.

"There is a tremendous sense of urgency that Bush be driven from office," said New York gay activist Ethan Geto, calling the same sex marriage issue "the greatest political motivation ever."

But Matt Daniels, who helped draft the amendment and is president of the Alliance for Marriage said, "Any politician that stands in the way of protecting marriage, does so at their peril."

Providing a bit of cover for Kerry and Edwards is that some conservative Republicans — including former Georgia Congressman Bob Barr — oppose the amendment saying they don't want the constitution littered with directives that should be left to the states. Others say it shouldn't be used as a tool for discrimination.

And some activists argue that the issue really won't sway votes, with a good portion of the electorate having decided on their candidate or influenced by other matters.

"People vote on broader issues like the economy or the war" in Iraq, said Jeff Soref, a Democratic National Committee member and major fund-raiser in the gay community. "I think that people for whom this is an important issue made up their minds a long time ago."

Even Family Research Council president Tony Perkins, a vocal proponent of the constitutional amendment, said same sex marriage should be a factor in the presidential race, but it may be overshadowed by issues such as the war, the economy and terrorism.