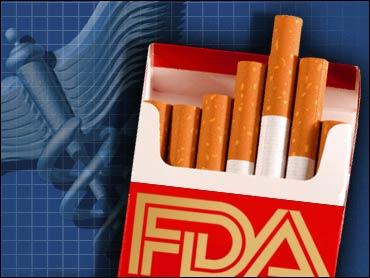 A key Senate vote Monday put Congress in sight of fulfilling a decade-old quest to put the content and marketing of tobacco products under the control of the federal government.

The legislation would for the first time give the Food and Drug Administration legal authority to regulate cigarettes and other tobacco products. The 61-30 Senate vote to move forward on the bill sets up possible passage of the measure this week. Sixty votes were needed to keep the bill on track.

The House has already passed a similar bill and resolution of minor differences would send it to President Barack Obama, who supports it.

The Senate action was critical because, under Senate rules, it ended the possibility of senators offering amendments, some highly controversial, that are not relevant to the FDA regulation issue.

Among the proposals senators had hoped to attach to the bill were a North Korea sanctions bill, a "cash for clunkers" bill providing government vouchers for people trading in old cars for more fuel-efficient models and a prescription drug importation bill.

Sen. John McCain, R-Ariz., made a strong but unsuccessful pitch for the importation bill, arguing that Canadians pay some 50 percent less than Americans for identical brand-name drugs and American consumers could save $50 billion over 10 years if allowed to buy imports declared safe by the FDA.

Similar measures have passed the House in recent years, but did not survive the strong opposition from both the pharmaceutical industry, which has spent millions lobbying against imports, and the George W. Bush administration.

Sen. Byron Dorgan, D-N.D., who with McCain has long pushed importation legislation, voted to advance the FDA bill, saying he had received assurances from Majority Leader Harry Reid, D-Nev., that the prescription drug bill would get a vote on the Senate floor in the near future.

Congress has been trying for more than a decade to give the FDA powers over tobacco products, particularly after a 2000 Supreme Court decision that the FDA could not regulate tobacco unless Congress changed the law.

The bill would, for the first time, give the FDA powers to regulate the content of tobacco products, order the removal of hazardous ingredients, restrict the marketing and distribution of cigarettes and smokeless tobacco, clamp down on sales to young people, require stronger warning labels and stop use of characterizations such as "light" or "low tar" that give people the impression of lower health risks.

A new office would be set up in the FDA, with administrative costs paid by a fee on tobacco companies.

Opposition has been led by North Carolina Republican Richard Burr, who argued that the FDA, which is in charge of ensuring the safety of products, was the wrong place to regulate a dangerous commodity.

He also complained that the bill would impede efforts to develop new, less harmful, tobacco products.

Some 400,000 people die of tobacco-related illnesses every year. Supporters of the legislation have linked reducing the financial costs of those illnesses, about $100 billion a year, to the overall drive to improve the health care system.