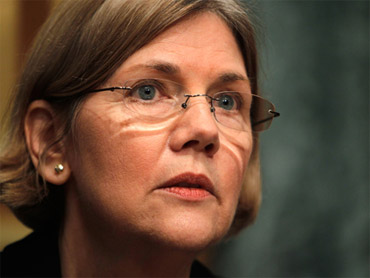 The Senate is technically staying in session - even though senators won't be doing any business - over next week's Memorial Day recess because Republicans want to prevent President Obama from making recess appointments, including the possible appointment of Elizabeth Warren to lead the Consumer Financial Protection Bureau.

Congressional Republicans, with the backing of Wall Street, have fiercely opposed the appointment of consumer advocate and Harvard professor Warren to head the commission she helped create. GOP Rep. Patrick McHenry (R-N.C.) accused Warren of lying this weekin one example of the aggressive criticism of Warren from the right.

The Consumer Financial Protection Bureau, which does not come into being until July 21, is tasked with writing and enforcing some of the new financial reform rules and acting as a consumer advocate. Liberals, including Sen. Al Franken, have pushed for Warren to be appointed to lead the bureau. But a potential Senate confirmation battle was expected to be nasty.

In a letter this week, Franken called on President Obama to "use his power constitutional power to bypass Republicans and make a recess appointment" of Warren. Seemingly out of concern that the president could do so, Senate Republicans threatened to block adjournment.

All 47 Senate Republicans, led by Senator Jeff Sessions, the ranking member on the Budget Committee, wrote a letter to Majority Leader Harry Reid which stated they would block any recess adjournment resolution because Democrats have not offered a budget. As CBS News Congressional Producer John Nolen reports, they said the Senate should stay in Washington during the planned recess to work on the budget.

Another group of Republican senators, led by Senators David Vitter (R-LA) and Jim Demint (R-SC), wrote to House Speaker John Boehner asking him not to pass the Senate's adjournment resolution in the House in order to block any recess appointments by the administration.

In response, Reid agreed to schedule three "pro forma" sessions while the senators are gone, on May 27, May 31 and June 3. (The Senate must be out for four consecutive days for a recess appointment to be made.) Senators who live nearby will come in to open and close the session, but no business will be done.

Warren is a longtime opponent of unfair lending practices, and she is detested by many on Wall Street. Republicans like Sen. Richard Shelby (R-Alabama), ranking member on the Banking Committee, have been working to weaken the consumer protection agency and keep Warren from running it.

Republicans have introduced bills mandating that the agency be run by a board of directors as opposed to one person; that Congress control its funding, which would make it less independent; and that banking regulators have more power to overrule agency regulations.

"It's a horrible agency," Shelby said on the Fox Business Channel this month. "No accountability, vests a lot of power in one person. No accountability as far as money to the Congress, self-funding so to speak. And something's got to give."

Republicans have also expressed concern that the president would recess appoint Craig Becker to the National Labor Relations Board. The Senate GOP maneuver - which Democrats previously used to keep George W. Bush from recess nominations - keeps Becker, Warren and anyone else from recess appointments next week.

Senate Minority Leader Mitch McConnell said Friday he is "confident there would not be any recess appointments" based on his conversations with the White House. He said he couldn't say based on the talks whether Warren's name is no longer on the table.