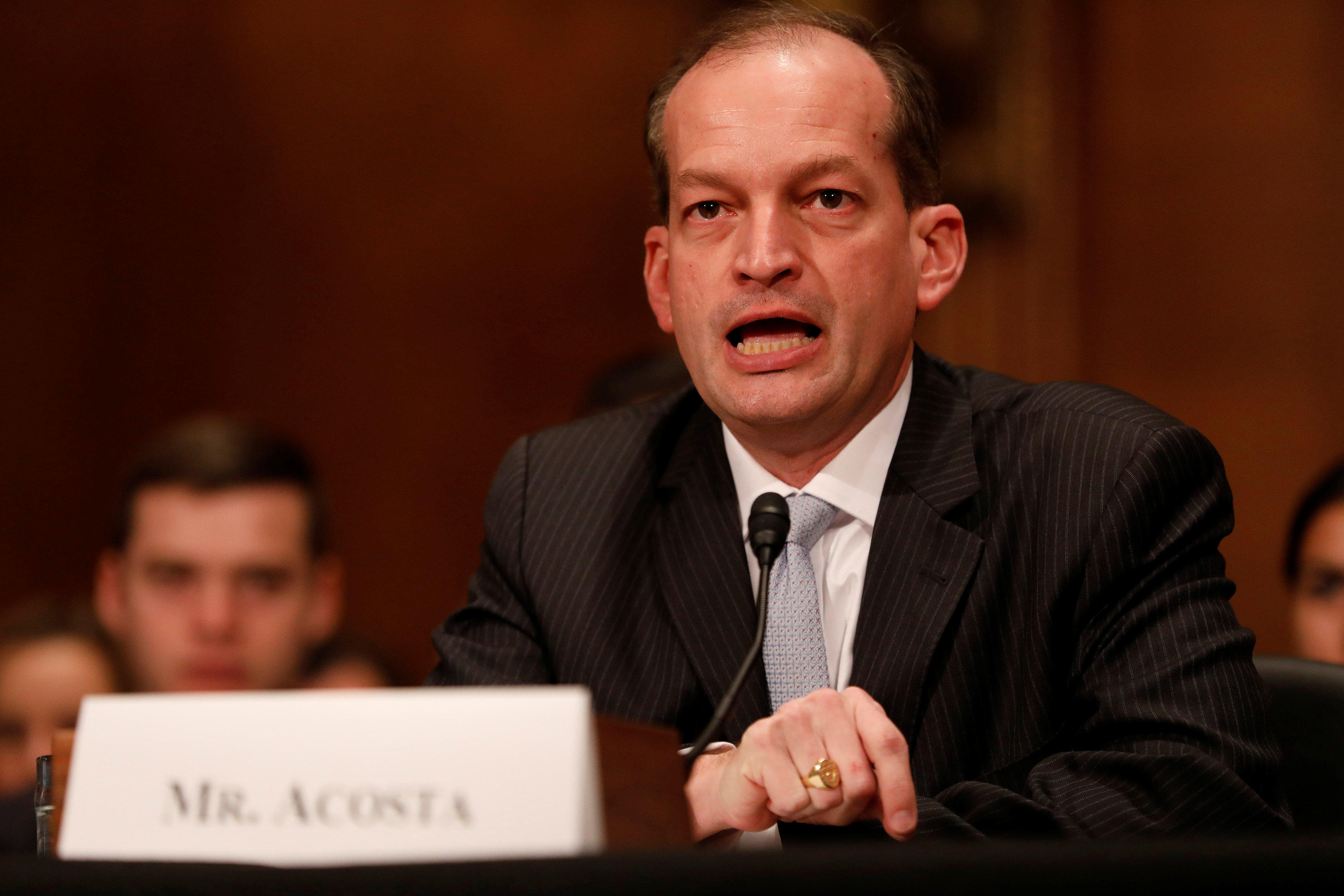 WASHINGTON— The Senate on Thursday confirmed Alex Acosta as secretary of labor, filling out President Donald Trump's cabinet as he approaches his 100th day in office.

The 60-38 vote confirms Acosta to the post. Once sworn as the nation's 27th secretary of labor, the son of Cuban immigrants will lead an a sprawling agency that enforces more than 180 federal laws covering about 10 million employers and 125 million workers.

Acosta has been a federal prosecutor, a civil rights chief at the Justice Department and a member of the National Labor Relations Board. He will arrive at the top post with relatively little clear record on some of the top issues facing the administration over key pocketbook issues, such as whether to expand the pool of American workers eligible for overtime pay.

Acosta wasn't Trump's first choice for the job. Former fast food CEO Andrew Puzder withdrew his name from consideration last month, on the eve of his confirmation vote, after becoming a political headache for the new administration.

Puzder acknowledged having hired a housekeeper not authorized to work in the U.S. and paying the related taxes years later — after Trump nominated him — and came under fire from Democrats for other issues related to his company and his private life.

Acosta's ascension would come at a key moment for Trump, just two days before he reaches the symbolic, 100-day mile marker. The White House has sought to cross the threshold with its own list of Trump's accomplishments.

Labor secretary is the last Cabinet post for Trump to fill. Trump's choice for U.S. trade representative, a job considered Cabinet-level, is awaiting a Senate vote.

From the beginning, Acosta's was a quiet march to confirmation that stood out because it didn't attract the deep partisan battles faced by some of Trump's other nominees, including Education Secretary Betsy DeVos and Secretary of State Rex Tillerson. Justice Neil Gorsuch's nomination provoked such a fight that majority Senate Republicans used the "nuclear option" to remove the 60-vote filibuster barrier for Supreme Court picks.

Thursday's vote marks the fourth time Acosta has been confirmed for the Senate.

Democrats and most labor groups were mostly muted in their response to Acosta's nomination. At his confirmation hearing, Democratic Sens. Patty Murray of Washington State and Elizabeth Warren of Massachusetts hammered Acosta for answers on a selection of issues important to labor and whether Acosta would cave to political pressure from Trump. Acosta refused to answer the policy questions until he's confirmed, and he vowed to be an independent and fair voice for workers. Both senators said they had great concerns, and both were expected to vote no.

Our standard can't be 'not Puzder,'" Murray said Wednesday on the Senate floor.

But tellingly, even as Acosta's nomination wound through the Senate, Democrats and their allies also tried to move on to other, labor-related issues — namely, a minimum wage hike to $15 an hour, which Trump opposes.

That's the title of Trump's executive order this week directing the secretaries of labor and other agencies to issue guidance within 60 days on policies that would "ensure that, to the extent permitted by law" federal aid "maximize the use of materials produced in the United States, including manufactured products; components of manufactured products; and materials such as steel, iron, aluminum, and cement."