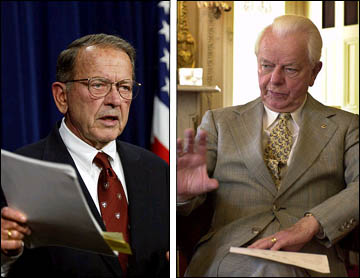 Between them, Democrat Robert Byrd of West Virginia and Republican Ted Stevens of Alaska have spent 80 years in the Senate, long ago forging a deferential bond that survived the Vietnam War, Watergate, an impeachment and record budget deficits.

But the often warm friendship between two of the most cantankerous and perhaps most feared power brokers in Washington has been frayed over the war in Iraq. Their solicitous exaltations of one another replaced by uncharacteristically gruff clashes in recent months.

"I don't know," Stevens, who turned 80 last month, said about his relationship with Byrd. "We'll just have to see what happens now."

Byrd, who turned 86 two days later, said his affection for Stevens is "too deep" to be hurt by one issue. But he added, "I think of this as I think of life, one day at a time, one issue at a time."

The two men are linked by more than longevity.

They sit elbow to elbow on the Senate Appropriations Committee, where Stevens is chairman and Byrd the top Democrat and longtime chairman when his party had the majority. That panel is one of Congress' most crucial, responsible for 13 must-pass spending bills every year that control the purses of every federal agency and one-third of the $2.2 trillion federal budget.

It's also one of Congress' most rewarding committees for lawmakers, who use it to win roads, dams and other projects for the folks back home. Almost in a class by themselves, Byrd and Stevens have used their perches over the years to steer vast federal sums to their economically fragile states.

It's a committee that demands bipartisanship to function. Byrd and Stevens know that better than anyone - as they demonstrated just before Congress recessed for Thanksgiving, when they helped craft a massive $373 billion package combining seven overdue spending bills.

The House has passed the measure, and the Senate will deal with it when the next session of Congress starts Jan. 20. Its fate is uncertain, not because of any bad feelings between Stevens and Byrd but due to fights over provisions the Bush administration won on overtime pay, media ownership, meat labeling and other issues.

"I'm sure they'll try to work together," Sen. Thad Cochran, R-Miss., another senior Appropriations Committee member, said of Byrd and Stevens. "They've got to work together."

Stevens and Byrd have survived past spats, such as disputes over their office space when Democrats took Senate control in 2001 and Republicans won it back two years later.

But their association was never as openly damaged as by the two-month congressional fight over President Bush's request for funds to fight wars in Iraq and Afghanistan and rebuild both countries. President Bush signed the $87.5 billion measure Nov. 6.

Stevens saw his role as championing the president's proposal, while Byrd was one of the Bush administration's foremost critics and was determined to defend Congress' power of the purse. Neither saw reason to back down, such as at one September committee hearing with L. Paul Bremer, the U.S. administrator of Iraq.

"I don't think I've ever been treated with such discourtesy as I have on this occasion," Byrd said after Stevens turned down Byrd's request for another hearing. "And I'm surprised, Mr. Chairman, that you would treat your old friend like that."

During that same session, Stevens told Byrd, "I'm not here for you to read me the New York Times," after the West Virginian read a headline from that newspaper. "I read it yesterday. Now, I have to go home, sir. Do you have any more questions for Ambassador Bremer?"

"Well, you're not going to rush this senator," Byrd responded.

At another meeting two days later, Stevens interrupted Byrd when Byrd persisted in talking after his allotted time had expired.

"Thank you for your courtesy," Byrd said in a tone that sounded sarcastic.

"Senator, I was courteous," Stevens replied.

That sparked a prolonged exchange that ended when Stevens asked, "Is the senator finished?"

"Go ahead, Mr. Chairman. You're in charge," said Byrd.

There were other acerbic confrontations as well, all in contrast with the gracious way they have interacted and helped each other for years.

Byrd has called Stevens the best appropriations chairman with whom he has served, and Stevens has returned similar compliments. Stevens did not block the Appalachian Regional Commission, which Byrd helped create, from funneling aid to West Virginia, and Byrd reciprocated when Stevens produced the Denali Commission to provide similar economic assistance for Alaska.

Stevens still recalls the concern Byrd showed when Stevens' first wife was killed in a 1978 plane crash, an accident that Stevens survived.

Now that Byrd's wife, Erma, has health problems, "I don't think a day goes by when I don't ask him" about her, Stevens said.

"We've shared periods of real highs and lows in terms of our family problems," Stevens said. "It's hard to put that in context of what we're doing right now in terms of war."