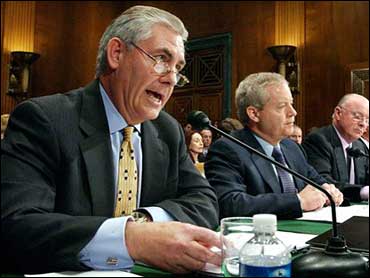 Lawmakers told oil executives Tuesday that a "merger mania" in their industry has significantly diminished competition and allowed soaring oil and gasoline prices.

"These price increases cannot be explained solely by increased cost of oil," said Sen. Dianne Feinstein, D-Calif., as chief executives of the country's six largest oil and refining companies waited to testify at a Senate hearing.

The executives, in testimony before the Judiciary Committee hearing, defended the industry's consolidation arguing that large companies are needed to compete in oil exploration and in the global oil markets.

John Hofmeister, president of Shell Oil Co., said that despite the size of the major oil giants "this remains a highly competitive industry." He said as an example Shell's gasoline brand has only a 12 percent market share nationwide and that 90 percent of its stations are owned by independent retailers.

But senators, both Republicans and Democrats, questioned the industry concentration, especially in the refining and retail areas.

"It is naive to think that massive consolidation has had no impact" on prices, said Sen. Charles Schumer, D-N.Y., who suggested "we should seriously explore divestiture, particularly on the downstream refining and retail" areas.

In 2004, the five largest refiners controlled 56 percent of the gasoline refined in the United States and the 10 top companies controlled 85 percent, according to a study by Public Citizen, a private advocacy group.

The legislation also would make it illegal for companies to hold back refining crude oil, or to divert or export refined products such as gasoline, when supplies are short in a region in order to hold up prices. Some refiners in the past have been accused of diverting supplies despite supply shortages in a region.

"It isn't illegal just to be big," said Sen. Mike DeWine, R-Ohio, chairman of the Judiciary antitrust subcommittee. "What is not legal is when a company abuses its size or uses unfair tactics to shut out its competitors or harm competition."

State prosecutors from California and Wisconsin testified that current federal antitrust laws hinder prosecution for price gouging and excessive concentration in the refining and retail oil and gas industry.

Schumer criticized the "rubber stamp mentality" of the Federal Trade Commission in its approval of oil mergers.