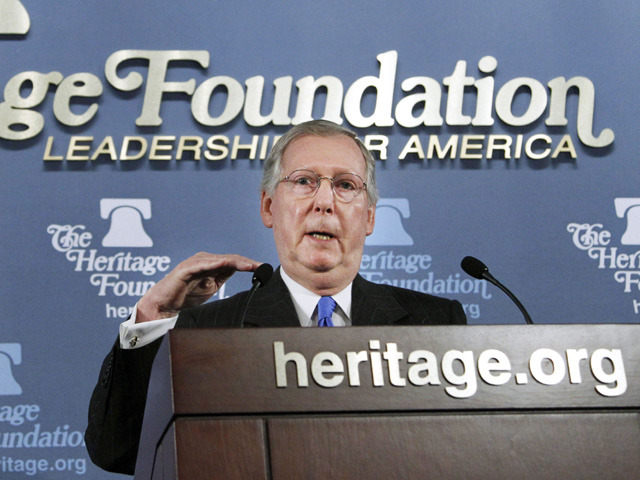 In his post-election Heritage Foundation speech, Senate Minority Leader Mitch McConnell said, "I re-extend an offer that's been on the table for two years to cooperate on shared goals -- because ultimately this isn't about an election; it's about doing what's best for our country."

Prior to the Nov. 2 election, McConnell told the National Journal's Major Garrett, "The single most important thing we want to achieve is for President Obama to be a one-term president."

At the same time he said he would be willing to compromise on important issues "if President Obama does a Clintonian backflip," referring to how the former president responded after a tough mid-term election in 1994.

President Obama took a swipe to McConnell's remarks regarding the 2012 election.

To be fair, McConnell and his party have talked extensively (although without many specifics) about their priorities, such as repealing the health care reform bill, ending bailouts, reducing spending, and preserving tax cuts for wealthy Americans, and they would argue that those goals are for the good of the country. And, Mr. Obama himself has been known to offer partisan advice, such as urging Latino voters to "punish our enemies" (he later said "opponents" would have been a better choice of words) on Election Day.

McConnell is a fierce fighter for his party's agenda, but does he put what's best for the country before party politics? As pointed out by his local paper, The Courier-Journal, McConnell has some explaining to do.

In his autobiography, "Decision Points," former President Geoge W. Bush describes a Sept. 2006 meeting with McConnell in the midst of a tough time in the Iraq occupation and an upcoming mid-term election. According to the former president, McConnell urged him to bring some troops home from Iraq to lessen political risks, as the Democrats looked ready to take seats from the Republican Party. Mr. Bush rebuffed McConnell's request — and the Republicans did receive a "shellacking" by the voters.

On Sept. 5, 2006, as part his political maneuvering, McConnell said, "The Democrat[ic] leadership finally agrees on something — unfortunately it's retreat," referring to a letter from Democrats calling on Mr. Bush to reduce troop levels in Iraq.

So far McConnell's office hasn't denied the conversation cited in Mr. Bush's memoir. So it remains a clear example of what's wrong in Washington, and why voters have such distrust of Congress

In a Washington Post op-ed, pollsters Douglas E. Schoen and Patrick H. Caddell recommend what they suggest is the only way to affect forward movement in Washington: Mr. Obama foregoing a second term. They wrote:

"If the president goes down the reelection road, we are guaranteed two years of political gridlock at a time when we can ill afford it. But by explicitly saying he will be a one-term president, Obama can deliver on his central campaign promise of 2008, draining the poison from our culture of polarization and ending the resentment and division that have eroded our national identity and common purpose."

It's a highly unlikely scenario. The 2012 race is already underway. Every move in Washington will be scrutinized and calculated (by each party) in terms of its impact on winning the presidency, and not necessarily on what is best for the country.