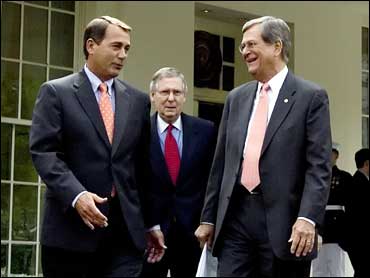 The second-ranking Republican in the U.S. Senate, Sen. Trent Lott, said Monday that President Bush's new strategy in Iraq has only a few months before his fellow Republicans will need to see results.

Lott's comment put a fine point on what Senate Republican stalwarts have been discussing quietly for weeks. It also echoed remarks made during the weekend by House of Representatives Minority Leader John Boehner (read more).

"I do think this fall we have to see some significant changes on the ground, in Baghdad and other surrounding areas," Lott told reporters. Fall, or autumn, is roughly the last three months of the year.

Lott would not say what he thinks should happen if Congress does not see improvement in the security situation by then. But he said lawmakers have time before they must decide.

Mr. Bush announced in January that he planned to send to Iraq 21,500 more combat troops, plus several thousand more support troops, in an attempt to tamp down violence in Baghdad and the western Anbar province. Gen. David Petraeus, the U.S. commander in Iraq, said he could give a better assessment in September of whether the strategy is working.

Republicans have agreed to uphold Mr. Bush's veto of $124.2 billion legislation that would have funded the war but called for troops to start coming home late in the year. Without the two-thirds majority support needed to override the president's veto, Democrats this week were redrafting the bill.

White House officials have sought to play down the expectations of the September review as merely a progress report, but many Republicans have latched onto the date as a critical juncture. War funding for this fiscal year, while still under negotiation, is expected to run out Sept. 30.

"Obviously, his (Petraeus') response or developments will make a difference in the next fiscal year," said Lott.

Lott said he generally agreed with Boehner, who told "Fox News Sunday" that, "By the time we get to September or October, members are going to want to know how well this is working, and if it isn't, what's Plan B."

Thus far, Republicans have stood behind the president's increasingly unpopular war policies, including the troop increase and an open-ended war commitment.

Yet the comments made by Boehner and Lott are an acknowledgment of the concern expressed by some lawmakers in private; that their support of Mr. Bush could further damage the party, which lost control of Congress in the November elections.

The new Democratic leadership is pushing to begin pulling troops out of Iraq.